One of the best parts of Thanksgiving is all the leftovers. But as we know from our recent post on food safety, leftovers have a short shelf life. We’ve gathered several delicious ways to turn leftover mashed potatoes into other dishes, from bread and soup to pasta and dessert. In fact, these recipes sound so good, you might plan to make extra mashed potatoes just so you can try them. Enjoy your traditional turkey dinner on Thanksgiving, and get ready to expand your eating horizons the next day with these recipes using leftover mashed potatoes.

King Arthur Flour is our go-to source for bread recipes because they never disappoint. This potato bread recipe is at the top of our must-try list because not only does it call for leftover mashed potatoes, it also uses the water in which you boiled the potatoes before mashing them. But if you don’t remember to save the potato water, you can always use plain lukewarm water. Do keep in mind this dough will need to rise twice, and the first rise should be overnight (or up to 24 hours) in the refrigerator. The recipe makes two loaves of bread, but King Arthur Flour thoughtfully offers tips for successfully halving the recipe. 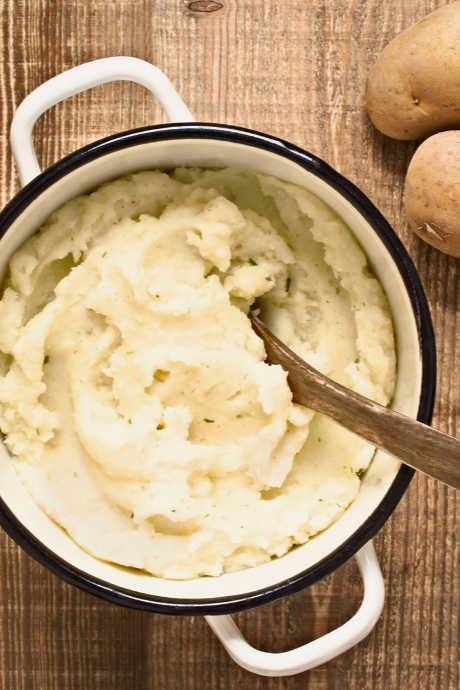 Maybe we should have included this recipe from Creme de la Crumb under desserts. (That’s right; there’s a dessert section coming up.) However, we Americans have a tendency to eat dessert for breakfast, so we’re going to stick to our guns and classify this as a bread recipe. These are yeasted cinnamon rolls, so the dough will require some time to rise. It also calls for a stand mixer to mix the dough. However, the recipe is simple and straightforward, and it’s a delicious way to use up leftover potatoes. If you’ve only added salt and butter, your potatoes should work fine. This recipe makes 16 servings, but that’s only if you limit yourself to a single roll. We may not have such willpower.

We don’t consider ourselves to be particularly high maintenance, but life is too short to eat boxed or frozen gnocchi. All types of pasta are more delicious when made fresh, but when it comes to gnocchi, fresh is non-negotiable. Fortunately, leftover mashed potatoes are perfect for making fresh gnocchi. It’s actually quite simple too, as you’ll learn in this recipe from Tasting Table. Mix two cups of mashed potatoes with a cup of flour and an egg. Combine thoroughly, but don’t overmix or your gnocchi will be heavy and dense instead of light and fluffy. Boil it briefly and toss it in your favorite light pasta sauce.

This soup is another reason to add leeks to your shopping list. The recipe was featured in Good Housekeeping, and it calls for leeks, fennel, garlic, celery, and fresh thyme, along with a hearty helping of leftover mashed potatoes and chicken stock. Cook the vegetables until they’re tender, then simmer with the potatoes, herbs, and stock. Fish out the herbs and puree the soup with an immersion blender. While the recipe notes it’s optional to add a teaspoon of lemon juice before serving, we’d recommend it based on what we learned from the SALT FAT ACID HEAT cookbook. The brightness of the lemon juice helps balance the richness of the soup.

We featured this shepherd’s pie recipe from Iowa Girl Eats in our post about Pi Day recipes, and it’s become a staple at our house. While shepherd’s pie may seem labor-intensive, this recipe is actually quite simple. Let the beef braise slowly, along with the aromatics, and stir in the requisite peas before adding the mixture to a casserole dish and spreading leftover mashed potatoes on top. You may need to warm up the potatoes so they spread evenly instead of clumping up. On a cold night when you can use comfort food, put shepherd’s pie on the menu. 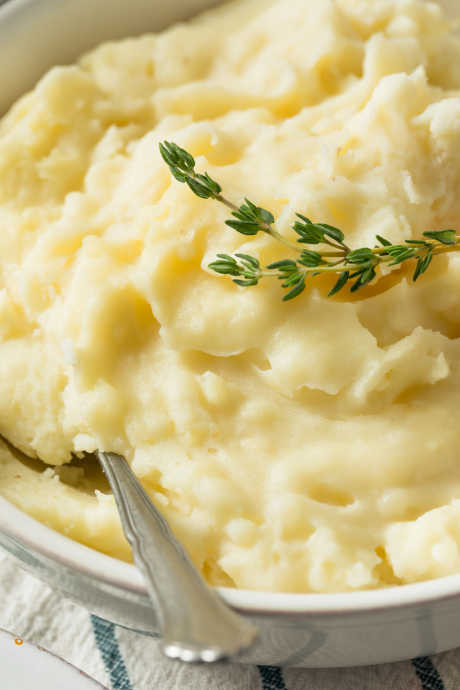 This recipe from NYT Cooking is even more straightforward than shepherd’s pie. It’s a comforting companion to leftover turkey. Keep in mind this recipe makes 12-14 servings, so you may need to halve it or even cut it by two-thirds, depending on how much mashed potatoes you have on hand. It calls for Yukon Gold potatoes which are rich, creamy, and flavorful even before you add butter. If you don’t already have butter and sour cream mashed into your potatoes, add those along with salt, pepper, and chopped fresh chives. Spread the potato mixture into a greased baking dish, and top with bread crumbs tossed with grated Parmesan and melted butter.

Zeppole is Italian fried dough that’s similar to an American doughnut hole. We chose this recipe from Giada de Laurentis on Food Network not only because of her Italian bona fides, but also because it uses leftover cranberry sauce for dipping. First, you’ll combine the mashed potatoes with milk, sugar, eggs, butter, vanilla, and cinnamon, and then refrigerate the mixture. Before frying, you’ll add flour, baking powder, and salt. Because both butter and salt are included, we say it’s fine to use mashed potatoes that have already been seasoned. But if you’ve added garlic, cheese, rosemary or other herbs, save those potatoes for a savory application instead.

While the photo of this cake on Just a Pinch is a blurry close-up, the recipe earned a blue ribbon from their test kitchen. It’s also been saved and shared extensively among other chocoholics. Leftover mashed potatoes will work well, as long as you haven’t added garlic or herbs. The rest of the recipe is similar to most homemade chocolate cake recipes, but be sure to have cloves, nutmeg, and cinnamon on hand. You can sift powdered sugar or drizzle glaze over the top of the finished cake, or even spread frosting on it.