Spaghetti squash is a variety of winter squash that’s gained popularity as a vegetarian, low-carb, gluten-free alternative to pasta and rice. But it’s worth eating whether or not you have dietary restrictions or preferences. We’ve gathered a few ways to cook spaghetti squash, along with some recipes that call for this versatile vegetable. Let us know if you give them a try!

What Is Spaghetti Squash?

This winter squash is typically about a foot long, with a six-inch diameter and a yellow rind. Because spaghetti squash is a winter squash, it will keep on your countertop for a few weeks. You can find it at the grocery store all year long, but it’s in season during the fall and winter.

What sets spaghetti squash apart from other varieties is its texture when cooked. While butternut squash is smooth, and acorn squash is firm, spaghetti squash pulls away from the rind in long strands similar to pasta noodles. It also has a mild flavor that makes it an ideal vehicle for other, more intense flavors.

We recommend oven roasting spaghetti squash for added flavor, thanks to caramelization. Use a large, sharp knife to cut the squash in half from stem end to blossom end. Then use a spoon to remove the seeds and pulp. The pulp may look a bit stringy, but it’s not the same as the strands you’ll eventually be eating. Go ahead and throw away the pulp, or compost it. 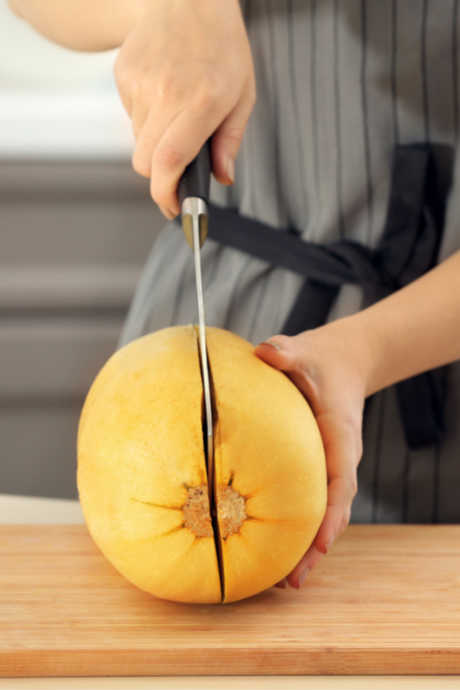 Brush the inner flesh of the squash with olive oil and sprinkle with salt and pepper if you like. Then put the squash on a baking sheet covered with foil or parchment paper, with the rind facing up and the flesh facing down. Roast at 375-400ºF for anywhere from 30 minutes to an hour, depending on the size of your squash. When the flesh is tender, let your squash cool before using a fork to gently separate the strands of flesh from the rind.

Another option that will take less time is microwaving spaghetti squash. While this method won’t give you the flavor that oven roasting will, most spaghetti squash recipes rely on other ingredients to provide flavor. Cut the squash in half, remove the seeds and pulp, and place the squash in a microwave-safe dish along with some water. You may need to cook one half at a time, depending on the size of your microwave and the size of your squash. Cook until the flesh is tender, let it cool, and then pull away the strands of squash.

Finally, your pressure cooker is another quick way to cook spaghetti squash. Like the microwave, it won’t add flavor, but it will help speed up the process. Use the steamer basket or rack at the bottom of your pot, and add water. Prep the squash as you would for microwave cooking, then cook it on high pressure for several minutes. Masterclass recommends seven minutes. Once again, let your cooked squash cool before removing the flesh from the rind. 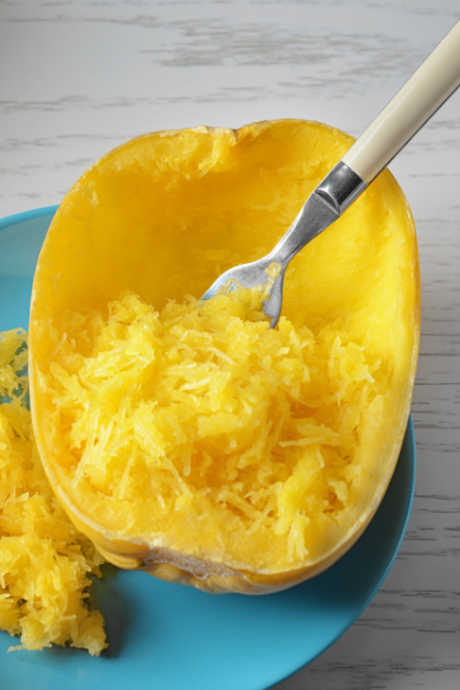 Now that you know how to cook spaghetti squash, what can you do with it? Just like spaghetti or angel hair pasta, you can serve it simply with salt, pepper, and butter, or top it with a light tomato sauce. You can also use it in place of many other ingredients. Check out our suggestions below.

Spaghetti Squash Instead of Fettuccine

The most intuitive spaghetti squash substitution is for long, thin pasta noodles, like fettuccine or linguine or spaghetti, of course. Pancetta, peas, and cream sauce are often served with these types of pasta, but this recipe from Food Network uses spaghetti squash instead. While the squash is roasting in the oven, make the sauce with shallots, thyme, white wine, cream, nutmeg, salt and pepper. Stir peas and Parmesan cheese into the sauce, then combine it with the strands of spaghetti squash. Top each serving with pancetta. Using spaghetti squash in place of pasta lightens up this dish.

Spaghetti Squash Instead of Rice Noodles

Spaghetti squash also does double duty for rice noodles. We love rice noodles, but they aren’t always easy to work with. In this recipe, also from Food Network, you’ll microwave the spaghetti squash instead of roasting it. The strands will be softer than when the squash is roasted. Make the peanut sauce by pureeing peanut butter, rice vinegar, soy sauce, lime juice, grated fresh ginger, garlic and red pepper flakes. Toss the squash with the sauce, and top each serving with chopped peanuts and cilantro. You can also add shredded chicken or grilled shrimp for extra protein. 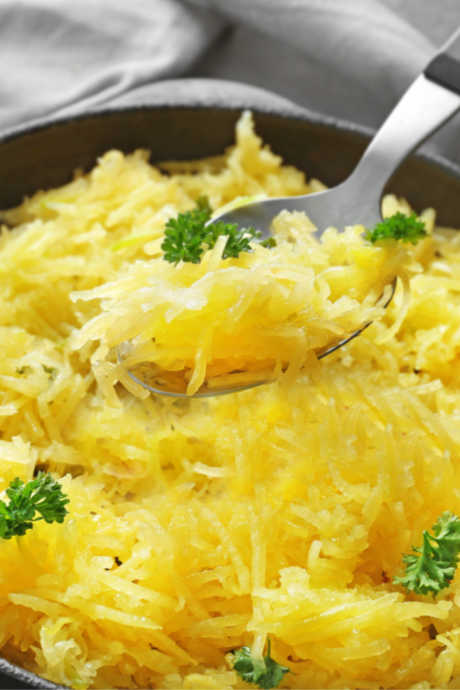 Spaghetti Squash Instead of Potatoes

We just might try this recipe from Wegmans, the iconic east coast grocery chain, in place of au gratin potatoes at Thanksgiving. Again, you’ll microwave the squash. Because you’ll bake the assembled dish too, you don’t want to dry out the squash with too much time in the oven. Then mix garlic, thyme, parsley, salt, pepper, crème fraiche, and two-thirds of the Asiago cheese. Stir this mixture into the squash strands, then transfer it to a shallow casserole dish. Top it with the rest of the cheese, and bake until browned. You can also make individual servings in small cocottes or ramekins.

Spaghetti Squash Instead of Grains

This recipe from Delish puts a Tex-Mex twist on spaghetti squash. Season the squash with chili powder, cumin, and salt before roasting it in the oven. While the squash is roasting, sauté onion, garlic, and ground beef for the filling. Then combine all those ingredients with the squash strands, black beans, corn, and halved cherry tomatoes. Bake the filling inside the squash rind, or use it to stuff peppers. Remember all the ways you can stuff peppers? Try substituting spaghetti squash for rice or quinoa in those fillings too.

This recipe from Pinch of Yum isn’t a twist on a classic recipe; it’s a spaghetti squash original. It’s a delicious example of how spaghetti squash doesn’t need to take the place of another ingredient. Roast the spaghetti squash, and then drain it in a colander to remove as much moisture as possible. Sauté garlic in olive oil, then add the squash, white wine vinegar, minced fresh herbs (parsley and basil), and salt. Stir in Gruyère cheese and top with toasted pine nuts. It’s served warm, but it takes hardly any time at all on the stovetop and would make a wonderful light summer lunch.