When a customer asked what she would need to make vegan cheese, our curiosity was piqued. We love the occasional plant-based burger on Meatless Monday, but our vegan cooking knowledge is admittedly lacking. We decided to explore vegan cheese for this latest edition of "Yes, Please or We’ll Pass."

The Basics of Vegan Cheese

It turns out there are a lot of options when it comes to making vegan cheese; dozens, in fact.

Most vegan cheeses have a base of nuts and/or alternative milks including soy, almond, and coconut. Since vegan cheese doesn’t age like milk-based cheese, an acidic component, like lemon juice or vinegar, is often used to mimic the sharp flavor produced by aging.

Several of the recipes we reviewed called for ingredients not found in your average pantry. 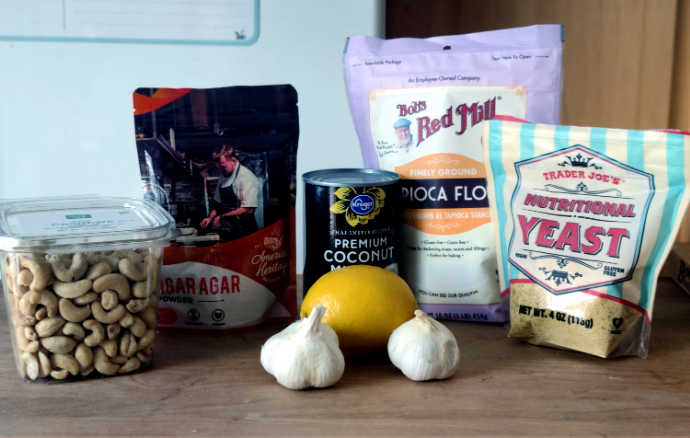 Nutritional Yeast: Technically the same kind of yeast used in bread baking, nutritional yeast has been pasteurized and dried out to extract nutritional benefits. Sold in flake form, it is known as a vegan substitute for parmesan, and a delicious popcorn topping.

Agar Agar: Found at several Asian markets and health food stores, agar agar is sold in strips or powdered form. Check your recipe to see which type you’ll need. Extracted from seaweed, agar agar is often used as a vegan substitute for gelatin. When used in vegan cheese, it acts as a thickener.

Lactic Acid: Used as a shelf-life extender and flavor enhancer, lactic acid is the byproduct of the bacteria Lactobacillus and Streptococcus breaking down sugars to produce energy. We’ve seen lactic acid at work in kombucha and sourdough. After a quick local search, we were only able to find it for sale online.

Tapioca Starch: Also known as tapioca flour, tapioca starch comes from the cassava plant. It’s often combined with other alternative flours in gluten-free baking. It's also used as a substitute for corn starch to act as a thickening agent. When boiled it makes a thickened sauce stringy, which is excellent when you’re trying to emulate cheese.

Give Cheese a Chance

We decided to test three kinds of vegan cheese.

When we found "vegan cheese" on Love & Lemons, we were drawn in by its claims of a "delicious oozy texture" and knew we had to try it on tortilla chips. With a cashew nut and potato base, we only needed to make a quick grocery store run.

Easy Garlic & Herb Vegan Cheese comes from The Minimalist Baker, and it's also made from a short, readily available ingredient list. Its nut base allows it to be used like a spreadable cheese: think Boursin, Neufchatel, or chèvre.

Vegan Mozzarella Cheese from The Hidden Veggies is supposed to have all the same qualities we love about traditional mozzarella. It can be sliced, grated, and even melted. It’s also one of the few vegan cheeses we could find that was nut free!

We’re pleased to report that while we did need to procure a few specialty ingredients, we did not need to buy any new equipment. We needed a sauce pot, a knife, a bowl, a strainer, a spatula, an absorbent kitchen towel, and our Vitamix.

We entered this experiment with the goal of creating vegan cheese that would emulate the texture and flavor of milk-based cheese. Sadly, while these recipes were easy to make, they didn't accomplish our goal.

The vegan cheese from Love & Lemons tasted good. However, we’d prefer to thin it out, serve it over pasta (and chicken), and call it a garlic sweet potato sauce. For our southwestern hearts and palates, it was not a solid substitute for queso.

Our office of taste testers agreed the texture of the easy garlic and herb vegan cheese was better than expected. But we thought it lacked that special tang that makes spreadable cheese so addictively good. We can usually polish off a tub of spreadable cheese with no problem, but it took effort (and a hearty desire to avoid food waste) to finish up these leftovers.

Finally, the vegan mozzarella was a major disappointment. As we stirred, it came together like our favorite cheese sauces, and begged for a taste. This is where things took a turn for the ugly -- like biting into a chocolate chip cookie, with chocolate chips made of plaster. It did hold up to the claim that it was shreddable, but we would not go so far as to call it meltable. The flavor did not improve with a second warm-up.

We really wanted to like these recipes, and and we hoped to add them to our rotation of our planet-friendly and nutritious food choices. Instead, we’ll stick with seasonal vegetables, beans, and leafy greens to round out our Meatless Monday meals.