One of the most widely-read posts we’ve ever written is this one about cheese boards. It seems our readers love cheese just as much as we do. We decided to take a deeper dive into a wide variety of cheeses. We discovered there were so many cheeses worth mentioning, we had to divide this topic into two posts. In this first post, we’ll cover the basics of cheese, along with information about a dozen hard cheeses. In the next post, we’ll go into more detail about how different varieties of cheese are created, and discuss an assortment of soft cheeses.

Just like other dairy products like yogurt and sour cream, cheese is derived from milk. It also contains salt, rennet, and microbes such as bacteria, mold, or yeast.

Salt: You might think salt is added to cheese expressly for flavor, but that’s only one reason for this key ingredient. Salt has a few other important functions in cheese. First, it helps reduce moisture. Part of what takes place in cheesemaking is the separation of curds (the solids that become cheese) from whey (the liquid left behind). Salt acts as a catalyst in this process. Salt also affects microbial growth and alters the texture of cheese. 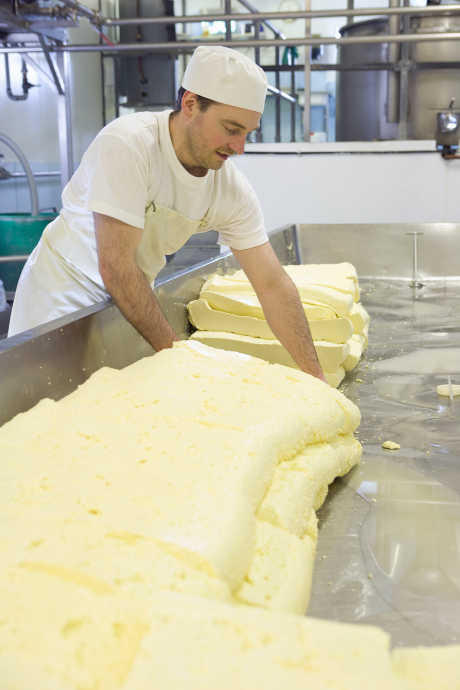 Rennet: Rennet is an enzyme found in the stomachs of ruminants (like cows, sheep, and goats) that causes milk to coagulate or form curds. While rennet may be the most well-known way to turn milk into cheese, acids are also used as coagulants, alone or in combination with heat.

Microbes: Some microbes are naturally found in milk or in the environment where cheeses are aged. Others may be purposely added by a cheesemaker to add flavor and alter texture. We’ll cover microbes in greater detail in our second post.

How Is Cheese Made?

We could write a dozen posts all about how cheese is made. We believe one of the reasons wine and cheese go so well together is that they can both be tweaked in a myriad of ways to subtly alter the finished product. Both wine and cheesemaking involve manipulating multiple variables over a span of time.

We’ll keep the details to a minimum here, but if you’d like to explore the science of cheese in greater depth, our favorite resource is Cheese Science Toolkit. It’s full of helpful explanations of the science behind cheesemaking. Even if you prefer to eat cheese rather than make it yourself, we bet you’ll be as fascinated as we were by this site.

1. Milk: Cheese starts with milk, whether that milk comes from cows, sheep, goats, or another mammal. Cheesemakers test the milk for safety and purity, and then they standardize it. The contents of milk vary based on what an animal has eaten, along with many other factors. To ensure cheese turns out as expected, cheesemakers may add fat or protein to a batch of milk. Finally, the milk is pasteurized to ensure harmful bacteria are destroyed.

2. Starter Culture and Rennet: Similar to a sourdough starter or a SCOBY when making kombucha, a cheese starter culture helps turn the lactose in milk to lactic acid. The acid starts the coagulation process. While this process can happen naturally, a starter culture ensures more predictable results. Rennet is an enzyme that also causes milk to coagulate and whey to separate from the curds. 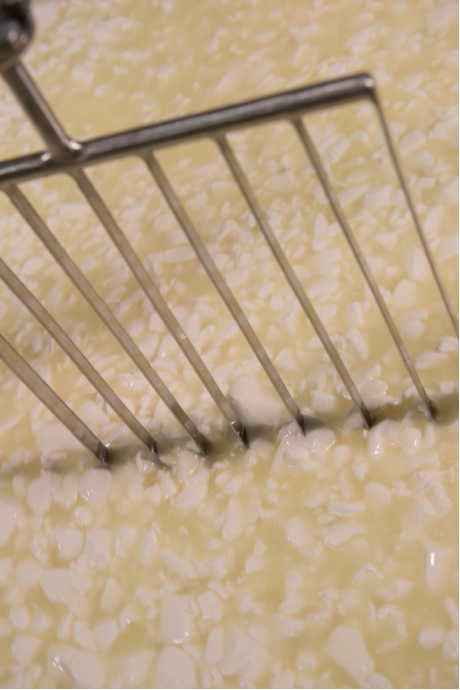 3. Cutting, Draining, and Pressing: Cheesemakers slice the curds to help release more whey, and the whey is drained from the cheesemaking vat. Depending on the type of cheese being made, the curds are cut into larger pieces (for softer cheese with more moisture) or smaller pieces (for harder cheese with less moisture). The curds are pressed into a mold, where more whey is expelled, and the curds began to adhere to each other.

4. Aging: This part of the process also varies depending on the type of cheese being made. Some soft cheeses are packaged and sold fresh. Other soft cheeses are aged, as are all hard cheeses. Aging, or ripening, may take as little as a few days or as long as several years. It takes place in a temperature- and humidity-controlled environment to ensure consistent results.

Want to see cheesemaking in action? We love this video from Wisconsin Cheese that features five cheesemakers through every step of the process.

Ready to learn about some of the most common hard cheeses? We expect you’ll recognize these favorites, but you may find a few surprises.

Asiago: This hard cheese originally hails from Italy. While Asiago is now commonly made from cow’s milk, traditionally it was made from sheep’s milk. Asiago can be smooth or crumbly, depending on how long it’s been aged.

Cheddar: While cheddar is one of the cheeses Wisconsin is most known for, cheddar was first made in England. It’s made from cow’s milk, and the natural color is white or pale yellow. The bright orange color we’re accustomed to is artificial.

Colby: Colby cheese may look like cheddar due to the added orange coloring, but the taste, texture, and origin are all different. It’s a mild and sweet semi-hard cheese made from cow’s milk, and it was created in Colby, Wisconsin.

Edam: Another semi-hard cheese is Edam, which is made from cow’s milk or goat’s milk and has a waxed rind. Edam is originally from Holland, and it pairs well with fruit, making it a delicious choice for a cheese board. 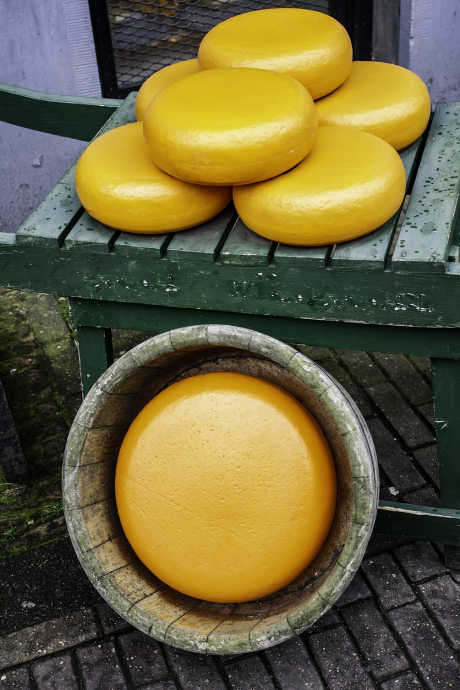 Fontina: This hard cheese is another one from Wisconsin, made from cow’s milk. Fontina is creamy and mild, and it’s known for melting well in sauces and pastas, and on pizzas and sandwiches.

Gouda: Gouda can be made from cow’s milk, goat’s milk, or sheep’s milk. It’s a semi-hard cheese with a waxed rind, and it’s originally from Holland. Gouda accounts for over half of the world’s cheese consumption.

Monterey Jack: This mild, creamy cheese was created in Monterey, California by friars in monasteries. The name Monterey Jack came from David Jack, the man who began to distribute it around California. Monterey Jack is a semi-hard cheese made from cow’s milk.

Parmesan: Similar to Asiago, Parmesan is originally from Italy. It’s made from cow’s milk, and the texture is gritty, grainy, or crystalline. While many cheeses attempt to imitate Parmesan, the real deal comes from cows on a diet of grass and hay. 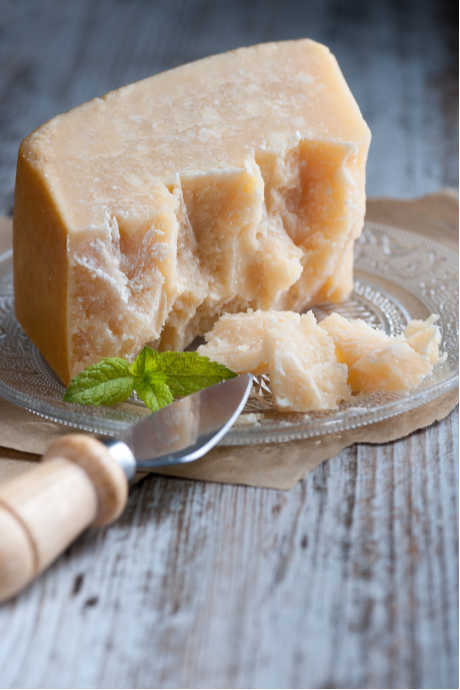 Pecorino Romano: Yet another hard cheese of Italian origin, Pecorino Romano is crumbly and grainy like Parmesan. It’s usually aged for upwards of eight months, and it has a sharper taste than Parmesan or Asiago. Grate Pecorino Romano over pasta, salads, and casseroles.

Provolone: This semi-hard cheese is made from cow’s milk and comes from Italy. While the flavor depends on where it’s produced, Provolone made in the US is usually light in color and mild-tasting. Provolone is often used on both hot and cold sandwiches.

Swiss: Contrary to expectations, Swiss cheese was created in the US as a variation on Emmental cheese from Switzerland. Swiss is made from cow’s milk, and it has a mild, sweet taste. Swiss cheese is known for its holes (or “eyes”), though not all Swiss cheese has holes.

Wensleydale: Wensleydale hails from England, where it’s made from cow’s milk or sheep’s milk. It dates back to the twelfth century when it was made by monks. Now, several creameries in England produce different varieties of Wensleydale with distinct flavors.