You can’t simply dump canned baked beans into a casserole dish and serve them. Well, we suppose you can, but we wouldn’t suggest it. There are plenty of tempting baked bean recipes to be found. We spent some time perusing several of them, and we’re going to share our top two recommendations. We hope you’ll give at least one of them a try this summer.

We hope The Pioneer Woman, Ree Drummond, won’t take offense at how we’ve labeled her friend Pam’s baked bean recipe as “the easy way.” All we mean is that these homemade baked beans include three of the large cans of classic Pork and Beans. Using canned beans helps speed up the process.

Start by frying eight strips of thick-cut bacon, but stop when the bacon is partially cooked. You want bacon drippings in your skillet so you can saute some onions and peppers in it. But you also want the bacon to finish cooking in the oven, after you place it on top of your casserole of beans. 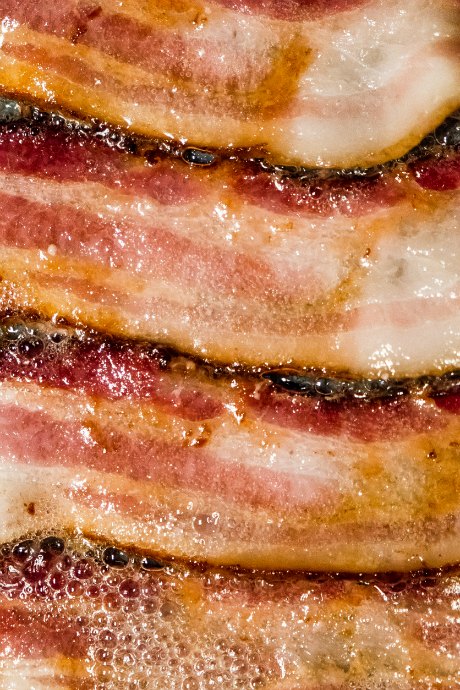 The sauce in a can of pork and beans isn’t substantial enough for homemade baked beans. Mix together barbecue sauce, brown sugar, cider vinegar, and Dijon mustard to add to your pork, beans, onions, and peppers. Then pour everything into a large casserole dish.

For delicious homemade baked beans, bake them at a low temperature for a long time. The bacon will be brown, without excess grease pooling under it, and the sauce will be thick. Because you don’t stir the beans while they’re baking, they should still be whole, and soft and creamy on the inside.

It’s a misnomer to say this baked bean recipe from Serious Eats is hard. It's not difficult to make baked beans from scratch, but they are time-consuming. However, these might be the best homemade baked beans you’ve ever eaten.

Start with dried navy beans. You’ll soak them in salted water for several hours, or even up to a full day. If you have any doubts, check out the research done by Serious Eats that supports salting the water. It will help keep your beans from bursting.

Rinse the beans after soaking, and then simmer them until they’re tender. You don’t want to par-cook them, because the baking process will take too long. Instead, be sure they are fully cooked. You can simmer them with aromatics too, like carrots and onions and garlic.

Once the beans are cooked, toss the aromatics and keep the bean water. You will need it. Similar to pasta water, the bean water contains starch that will help improve the texture of your sauce.

Mix the beans with molasses, Dijon mustard, pepper, diced onion, and salt pork or thick-cut bacon. The molasses is one reason to hang onto the bean water; adding bean water helps lower the viscosity of the molasses and makes it easier to mix with the beans. 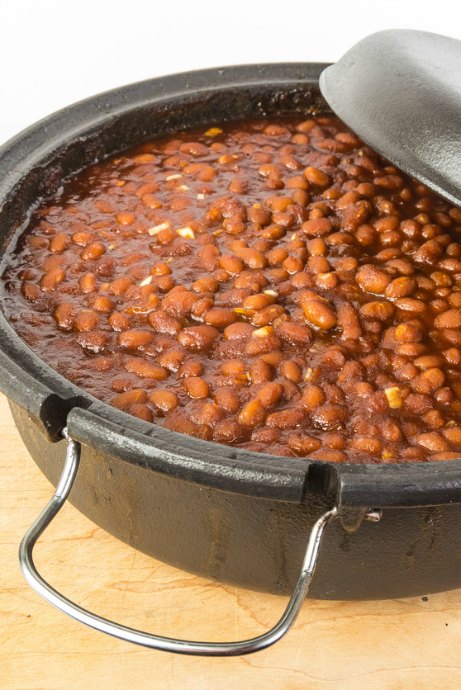 Next, you’ll cook the salt pork or bacon in a Dutch oven, and then add onion and saute it in the rendered pork fat. Bacon is leaner than salt pork, so you can use more if you like. You don’t want your homemade baked beans to be greasy. Add the beans, and then stir in the molasses mixture. Grab the leftover bean water and fill the Dutch oven to just cover the beans. Don’t toss the rest of it yet.

Again, you’ll bake the beans at a low temperature, but for twice as long as in the recipe above. You will stir the beans, but only twice during the entire cooking period, and only to make sure the beans near the surface don’t dry out. Add more bean water as necessary to keep the beans moist and the sauce thick. Once the surface has browned and the beans are ready, consider adding a splash of cider vinegar for acidic balance.

Whether you choose the easy way, the hard way, or your own way, be sure to enjoy some homemade baked beans this summer. They are a barbecue classic!