Q: I'm hosting Thanksgiving this year, and I want everything to be perfect. Any tips for how to make gravy from scratch?

A: Before we offer any advice on gravy, may we suggest striving for a happy Thanksgiving, rather than a perfect one? Stress tends to ruin the gravy, and the mashed potatoes too.

Gravy is actually one of the fastest and easiest elements of Thanksgiving dinner. If you can make a roux, you can make gravy from scratch. And while gravy isn't the prettiest of all the foods on your table, it just might be the most flavorful.

When the turkey comes out of the oven, you'll have a pan full of drippings. These will be the basis of your gravy. Then you can start making gravy using one of three methods:

In methods 1 and 2, allow the solid fat to separate from the liquid drippings in the container. The fat will rise to the top, where you can skim it off. You can put it in the refrigerator to accelerate the process, or you can leave it on the counter. 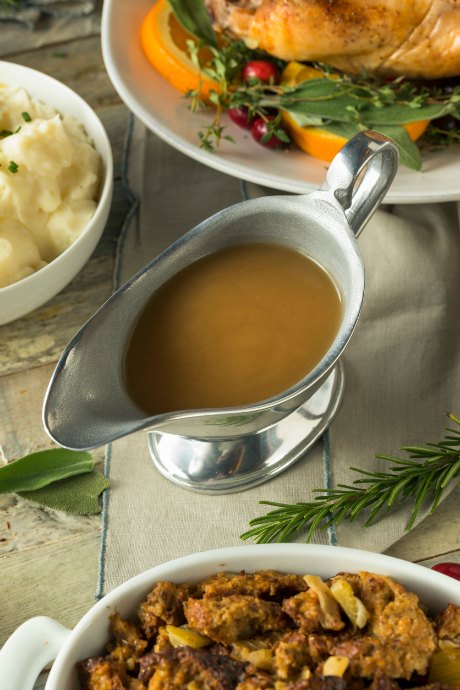 How to Make Gravy From Scratch: Method 1 (The Pioneer Woman)

With this method, you'll make the gravy right in the pan where you cooked the turkey. Combine flour and separated fat with the rest of the bits left in the pan to make your roux. Add low- or no-sodium chicken or turkey broth first. Then add your liquid drippings and continue stirring over heat until your gravy thickens.

Definitely be sure that your broth is low- or no-sodium, and not just because it's healthier. You don't want your gravy to be overly salty, which will overpower the delicious flavor of those drippings.

How to Make Gravy From Scratch: Method 2 (The Kitchn)

Method 2 is similar to Method 1, with a couple key differences. First, because you deglazed the turkey pan, you'll make your gravy in a separate saucepan. Start with a roux using flour and the separated fat.

Next, add the liquid drippings to your roux. Again, because you deglazed the turkey pan, you will already have some broth combined with your drippings. That's why this method has you add the drippings first, to make sure all of that flavor makes its way into your gravy.

Finally, add more broth as you stir the gravy over heat until it thickens. We'd encourage you to use low- or no-sodium broth for this method too. You can always add more salt after you taste the gravy.

How to Make Gravy From Scratch: Method 3 (Martha Stewart)

Far be it from us to go against Martha's advice, but we'd recommend this method for those cooks who are already familiar with making gravy and can whip up a roux with their eyes closed.

As in method 1, you'll cook the gravy in the same pan where you cooked the turkey. But in this case, you won't pour the drippings into another container for the fat to separate. This means you'll have to eyeball your roux as you add flour, since you won't know exactly how much fat is in the pan.

Once again, you'll add broth or stock (or even water, Martha suggests) as your gravy cooks and thickens. Go for low- or no-sodium, and taste to see how strong the flavor is.

Good luck with your gravy! We're confident your Thanksgiving dinner will be delicious.