Most of the time, we focus on what you can cook and bake at home. Even especially challenging or time-consuming creations, like paella or Baked Alaska, are in our wheelhouse. But this post is purely informational, unless you’ve got a stand of mature sugar maple trees on your property. Making real maple syrup is a fascinating process, and sugaring season is about to start. 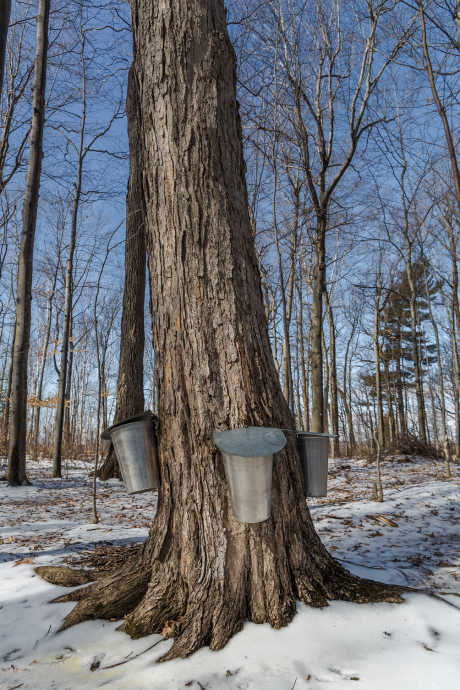 A stand of sugar maple trees is called a sugarbush. The sap in these trees comes from the sugar in the leaves, created by photosynthesis, plus water from the ground. Sap is produced during the summer and stored over the winter. In the spring, as trees grow and bud, the sap circulates to provide more energy to the tree.

Trees use the energy in sap for new growth, but drilling taps is what’s most injurious to trees. Those tapholes essentially become scars; the tissue is no longer functional once it heals. While healing, tapholes also put trees at risk for parasites and disease. That’s why sugarmakers -- the common term for those who make maple syrup -- follow best practices to ensure their trees continue to grow and thrive.

It takes 40 years of growth for a sugar maple to reach the size where it can be safely tapped. At a trunk diameter of 10 to 12 inches, a tree can handle one tap. When the trunk reaches 18 inches in diameter, a second tap can be added. Trees over two feet in diameter can accommodate three taps. Each taphole will yield about 10 gallons of sap. A new taphole must be drilled every year, and in a different location on the tree’s trunk.

While some trees are tapped the old-fashioned way with metal taps and buckets hanging from them, many sugarmakers use plastic taps and a system of polyethylene tubes. A vacuum pump routes the sap to storage tanks at the sugarhouse where it will be processed into maple syrup. The sap from trees with metal taps and buckets will be collected by hand and transported back to the storage tanks.

Trees are tapped when temperatures are well above freezing during the day and below freezing at night. These temperature fluctuations cause the sap to expand and contract, and pressure builds up to push the sap out of the tapholes. The sap will flow for four to six weeks, assuming the same temperature pattern continues. If it’s too cold or too warm, no sap will flow.

Sap looks and tastes nothing like maple syrup. It’s clear like water, and it’s not thick and sticky like syrup. In fact, sap is 98% water and about 2% sugar, whereas maple syrup is about 67% sugar. That’s why it takes so much sap to make syrup.

If you’ve ever reduced a sauce on the stovetop, you’ve gone through the same process that sugarmakers do when they make maple syrup. Turning sap into syrup boils down to heating it so the water evaporates and the sugar concentrates. (Pun intended.) 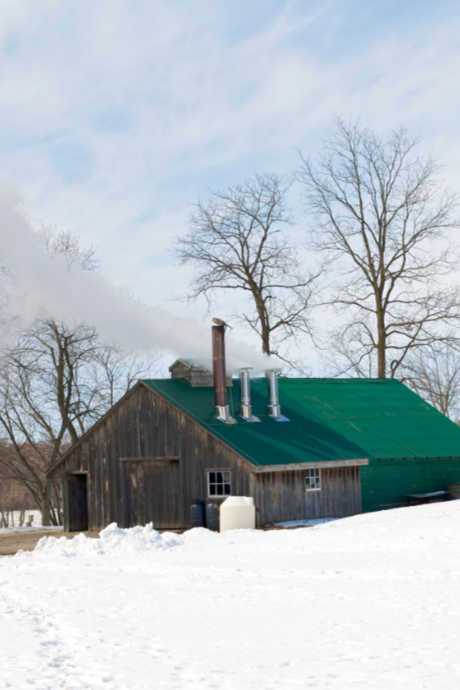 Some sugarmakers use reverse osmosis before boiling. Unlike how reverse osmosis is used for filtering and purifying water, sugarmakers discard the water and keep the sugar and other elements left behind. This substance is heated in evaporators, which are simply steel pans placed over a wood or oil fire. As the sap boils, water evaporates, and sugar caramelizes until it reaches a concentration of 67%, up from the original 2% sugar when the sap was collected from the taps. This change takes place when the temperature of the boiling sap is 219ºF.

One of the most fascinating facts we learned about maple syrup in our research concerns the chemical reactions that take place when sap turns into syrup. Chemists still don’t know exactly what elements are involved or how the reactions proceed. That’s why artificial maple flavor is a weak approximation of real maple syrup: the chemistry of maple syrup is unknown.

That’s also why maple syrup comes in different colors and flavors. These aren’t created by varying the processes and timing; they’re a result of variations in the sap collected from different trees at different points in the sugaring season. 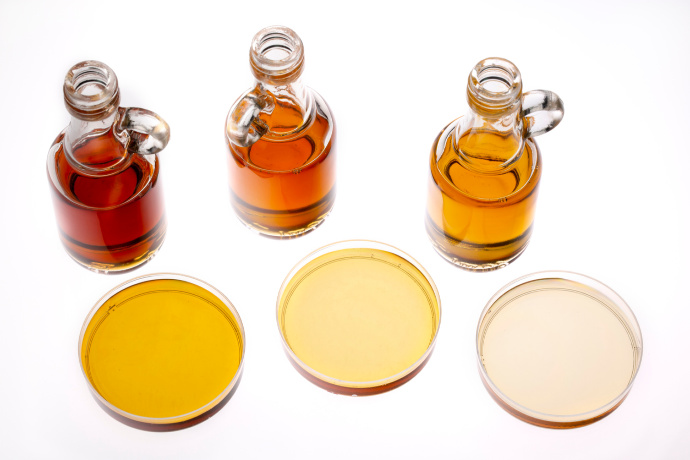 Maple syrup grades changed about five years ago. All syrup is grade A, and it is categorized into four colors and flavors:

The Vermont Maple Sugar Makers’ Association suggests topping ice cream or yogurt with Golden maple syrup. Amber maple syrup is the most common variety, and it is well-suited to a wide range of uses, including pancakes and waffles. Dark maple syrup is ideal for baked goods and glazed meats and vegetables. Finally, use Very Dark maple syrup when you want a strong, unmistakable maple flavor in your recipes.