Love ‘em or hate ‘em, mushrooms are a flavorful way to enhance a whole range of dishes. From the common white button mushrooms found in salad and on pizza, to wild-harvested rarities like chanterelles and morels, mushrooms are in a class all their own. Learn more about this food that’s neither animal nor plant, including which varieties can and can’t be cultivated, and why you shouldn’t forage for mushrooms unless you know what you’re doing.

Even though most people probably think of mushrooms as vegetables, they aren’t actually plants. Mushrooms are fungi. While they grow from spores, similar to how plants grow from seeds, they don’t require light. In fact, mushrooms are typically cultivated in the dark and found in shady spots in the wild.

Most mushrooms sold in grocery stores are cultivated, not harvested in the wild. They can be grown year round in any part of the country, but the majority are grown in Pennsylvania. Of the ten mushroom varieties discussed below, the first seven can be cultivated. The last three -- chanterelles, morels, and porcini mushrooms -- have proven difficult to grow outside of the wild.

This common variety accounts for 90% of mushrooms eaten in the US. The mushrooms on your pizza, in your pasta sauce, and sprinkled over your salad are most likely white button mushrooms. They can be eaten cooked or raw, and they have a mild flavor that goes well with other savory ingredients.

Maitake mushrooms also grow in a fan shape, but they’re darker in color and have a deeper flavor than oyster mushrooms. They’re sometimes called Hen of the Woods or sheepshead mushrooms. Because they are darker and richer, they’re best served to mushroom lovers, just like crimini mushrooms. 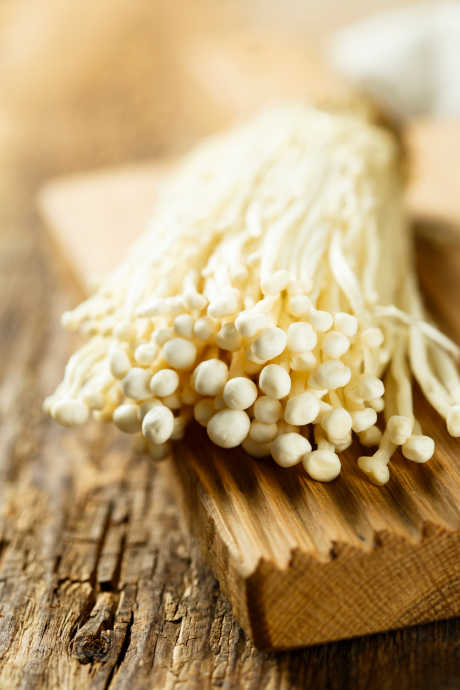 Enoki mushrooms are even lighter than white button mushrooms, with long slender stems and small round caps. They have a mild flavor and a crunchy texture, and are often served raw in salads and on sandwiches, similar to alfalfa sprouts or bean sprouts. Like oyster mushrooms, enoki mushrooms are also found in Asian cuisine, especially soups and noodle dishes.

Shiitake mushrooms are another staple in Asian cooking, with large brown caps that aren’t quite as broad as portabellas. You can buy them fresh or dried; fresh shiitakes are milder in flavor than dried ones. The stems are inedible, but they add flavor to stock and soup. Use them when making homemade vegetable or chicken stock [link], and simmer them in soups. Remove before serving, just as you would with bay leaves.

Chanterelles have a deep golden color and rich complex flavors, and the cap is shaped like the bell of a trumpet. They’re most often found in the wild, as chanterelle cultivation has not yet been successful. Chanterelles grow wild in the US and Europe, and many French recipes call for this rare ingredient. 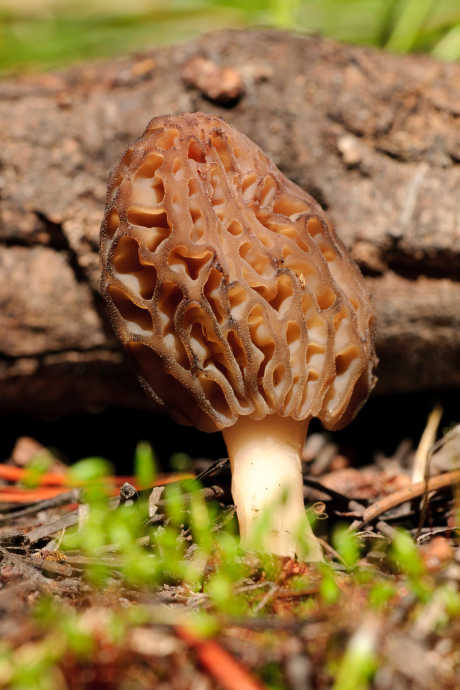 Like chanterelles, morels also grow wild in the US and have so far resisted cultivation. Morels are found in the spring and have a distinct appearance. However, they are easily confused with inedible mushroom varieties, so foraging should be done in the company of an expert.

Finally, if you find fresh porcini mushrooms on the menu, consider it a coup. Porcini mushrooms are only found in the wild and are difficult to source, even in France and Italy where they’re most popular. These smooth, woodsy delicacies are usually available in dried form and go nicely with pasta and risotto.

While many varieties of edible mushrooms can be found in the wild, you should only forage with great caution and in the company of an expert. It’s actually unlikely that you’ll pick a poisonous variety, but why take the chance? In fact, many poisonous varieties resemble sought-after wild mushrooms like chanterelles and morels. Plus, the internet is not always a reliable resource for matching pictures and features of mushrooms. In short, we don’t recommend picking, cooking, and eating wild mushrooms unless an experienced mycologist -- mushroom specialist -- has given you the go-ahead. Even then, don’t eat wild mushrooms raw; cooking helps make them easier to digest. Your best bet is to try these varieties in a restaurant where they’ve been expertly selected and cooked properly.

How to Select, Store, and Prep Mushrooms

When faced with a selection of raw mushrooms at the grocery store, it’s important to know what you’re looking for. The Mushroom Council explains how you can gauge a mushroom’s flavor based on its appearance: “A closed veil under the mushroom cap indicates a delicate flavor, while an open veil and exposed gills mean a richer flavor.” You should also look for firm, smooth mushrooms that aren’t mushy or desiccated. 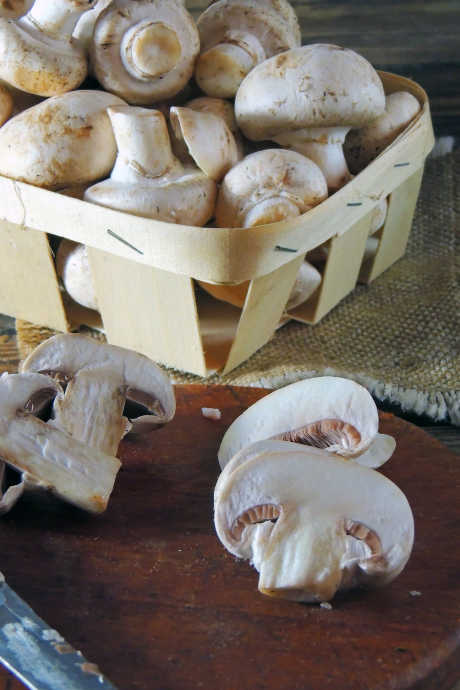 Leave your mushrooms in a paper bag until you’re ready to use them. Don’t freeze them unless you’ve cooked them first, and don’t soak them in water. You can rinse them quickly in cold water and pat them dry, or use a damp paper towel to brush off any dirt.

While there are hundreds of ways to prepare mushrooms, feel free to start by sauteing them in butter and adding them to pasta, risotto, or steak. We also especially liked the suggestion from the Mushroom Council to chop them into fine bits and mix them with ground beef. Use this combination to make burgers, meatballs, or meatloaf with a deep rich flavor while reducing your meat consumption.