Apples get a lot of love in the late summer and early fall, and for good reason: They’re delicious, portable, and full of nutrients and fiber. But today we’re going to focus on pears, which are often overlooked. While pears are an ideal on-the-go snack, they’re also a key ingredient in a variety of elegant desserts. We pulled together six pear dessert recipes for you to choose from, and we hope you’ll give one of them a try this fall.

Let’s start with a classic fall dessert made with pears. This recipe from Martha Stewart is as simple as it gets, but the results are warm, sweet, and comforting. Mix the topping first: rolled oats, brown sugar, slivered or sliced almonds, flour, salt, and cold butter. Cut the butter into small cubes, and use your hands to combine it with the dry ingredients. You can also use a pastry blender if you prefer not to dirty your hands. Transfer the topping mixture to the refrigerator. 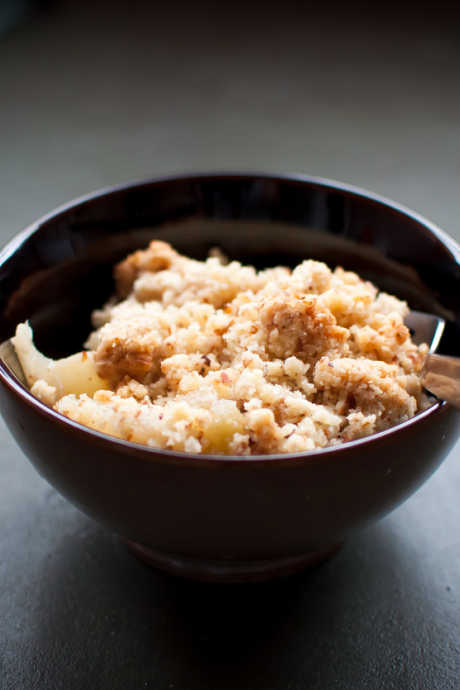 Then peel and dice the pears, and toss them with lime juice to keep the color true. Add a couple tablespoons of sugar, a quarter-cup of flour, and a dash of salt to the diced pears. Finally, grate a generous amount of fresh ginger over them -- a teaspoon and a half, to be exact. Spoon the pear mixture into a baking dish, and cover it with chunks of the topping mixture. Bake for up to an hour, and let it cool before serving. Martha recommends an accompaniment of vanilla ice cream. We concur, though you could also serve this pear crisp with whipped cream or on its own.

For a more formal occasion, we like this recipe from Sally’s Baking Addiction for Caramel Pear Pie. Sally links to her homemade pie crust recipe, but we won’t tell if you use a store-bought crust. Nobody will even notice because they’ll be so impressed by the filling and lattice-top crust.

Start ahead of time with Sally’s recipe for salted caramel. We were thrilled to discover it doesn’t even require a candy thermometer, and it only takes ten minutes to prepare. However, you’ll want to have it ready in advance because it takes a while to cool.

Peel and dice the pears, and mix them with sugar, flour, cinnamon, ginger, and lemon juice. Transfer the filling mixture to the refrigerator while you roll out the crust and press it into a pie dish. Then spoon the filling onto the crust. Sally cautions against adding too much liquid from the filling mixture, so we recommend using a slotted spoon to help drain any excess liquid. Pour a half-cup of caramel over the pear filling, and put the pie dish back in the refrigerator.

For the top crust, cut and shape the dough any way you like. You can use Sally’s design as a guide, or cut shapes with cookie cutters, or simply place the entire round of dough on top of the filling before crimping the edges. But remember to brush the top crust with egg wash, and sprinkle with turbinado sugar before you pop it into the oven. Cool the pie completely before serving with the rest of the salted caramel.

Another elegant option is a pear tart, such as in this recipe from The Kitchn. It’s time-consuming, but the results are impressive. They offer a gluten-free version, but feel free to make this dessert with all-purpose flour if you prefer.

Start with the crust, which consists of flour, walnuts, and salt, coarsely ground in a food processor and then chilled in the freezer. Separately, grate chilled butter and freeze the resulting pieces. Then process the dry ingredients with the frozen butter, along with ice water, until it starts to form dough. Press the dough into a tart pan, cover it with parchment paper, and add pie weights or dried beans before transferring the pan to the refrigerator for 20 minutes. Then bake the crust briefly, remove it from the oven, and allow it to cool. 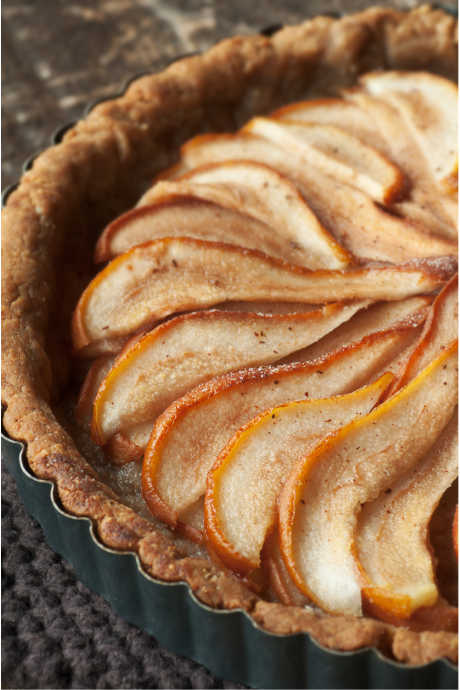 While the crust is cooling, prepare the pears and frangipane. For the pears, peel and quarter them. Add water, sugar, vanilla, and spices to a saucepan, and simmer until the sugar dissolves. Then add the pears to the saucepan, and bring the mixture to a boil. Reduce the heat and allow the pears to simmer for ten minutes. For the frangipane, simply process sugar, walnuts, softened butter, room-temperature eggs, and flour until it forms a thick batter.

Spread the frangipane on the tart crust, and set the poached pear quarters on top. We like how The Kitchn arranged them in a line down the center, but feel free to place yours however you like. Bake the tart until the frangipane puffs and browns. Then let it cool completely before serving.

If that pear tart sounds like too much, try making a single element of it. This recipe on Epicurious comes from a 1999 issue of Bon Appetit, and it received rave reviews. It does require hours of inactive prep time, so you’ll need to plan ahead.

Peel, core, and halve two pears, and toss them with lemon juice to keep the color true. Add water, white wine, and honey to a saucepan, along with the seeds from a vanilla bean (plus the pod itself), and simmer until the honey dissolves. Add the pears and simmer for another 15 minutes. Turn the pear halves over halfway through the cooking time to ensure they cook evenly. Remove the pears, and increase the heat, boiling the mixture until it’s reduced to three-quarters of a cup. Cool the syrup, remove the vanilla bean pod, pour it over the poached pears, and refrigerate overnight.

Just prior to serving, whip mascarpone cheese with sugar and brandy, plus a quarter-cup of the poaching syrup. Add a dollop of cheese to each pear half, along with a spoonful or two of syrup.

On the other hand, if you’re ready to embrace another challenging recipe, check out this one from Food Network. We’re eyeing it as a contender for Thanksgiving dessert (alongside pumpkin pie, of course), especially since it won’t require a turn in the oven that day. 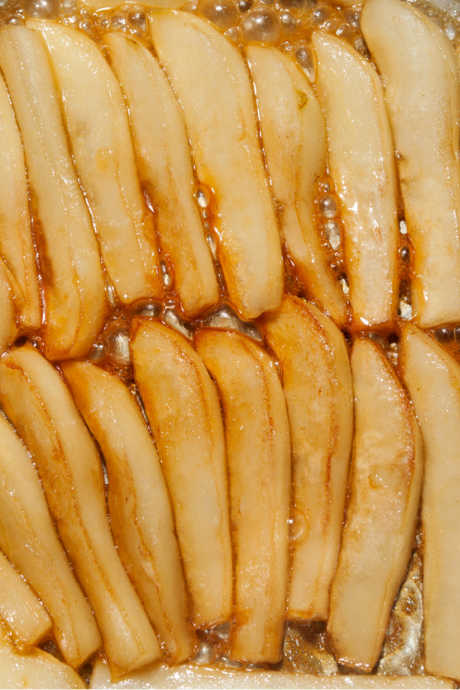 Process gingersnaps, melted butter, and brown sugar until they come together. Then press the mixture onto the bottom and one inch up the sides of a springform pan. Next, peel and slice the pears. Melt butter in a skillet, and cook the pear slices with some sugar until tender and browned. Add molasses and cook for a few minutes more. Finally, beat room-temperature Neufchatel cheese with sugar until well-blended. Then add eggs, vanilla, flour, and sour cream, beating after each new addition. Pour the filling into the crust, top it with the pear slices, and bake the cheesecake.

When it comes out of the oven, let the cake cool before transferring it to the refrigerator. Before serving, allow it to come to room temperature. Then spoon molasses syrup over each slice.

We know pear season is short. This recipe from Nigella Lawson is one that calls for canned pears, so you can enjoy it any time of year. It also features a handy conversion switch to display ingredient measurements in either metric or imperial.

All you have to do is drain the pears and place them in a square baking dish. Then blend the rest of the ingredients -- flour, cocoa, powdered sugar, butter, baking powder, baking soda, eggs, and vanilla extract -- in a food processor. Spread the batter over the pears, and bake for half an hour.

While the pudding is baking, make the chocolate sauce. Combine bittersweet chocolate (not unsweetened!) with a half-cup of brewed coffee and powdered sugar in a saucepan over low heat. When the chocolate has melted and the sugar has dissolved, stir in heavy cream. Then top slices of baked pudding with chocolate sauce.