As much as we love cooking and eating, we try not to take ourselves too seriously. We know future generations will snicker over our favorite recipes the way we gawk over vintage recipes from decades past. Someday, they will giggle over our dietary trends, our flavor combinations, and our collections of appliances that do everything but wash the dishes.

If you enjoy a walk down culinary memory lane as much as we do, you’ll love our finds from some vintage food blogs. Plus, what better way to make these retro recipes than with retro-inspired cookware from our virtual shelves?

These days, Jell-O is on the menu after surgery. But in previous decades, aspic and gelatin frequently appeared at dinner and dessert, respectively.

In short, aspic is savory Jell-O. It’s made with meat stock or tomato juice and used to suspend savory ingredients. Check out these recipes for  beef in aspic and tomato aspic from Vintage Recipe Cards, complete with photos of the finished dishes. For the strangest take on baked beans we’ve ever seen, don’t miss this recipe from Mid-Century Menu. 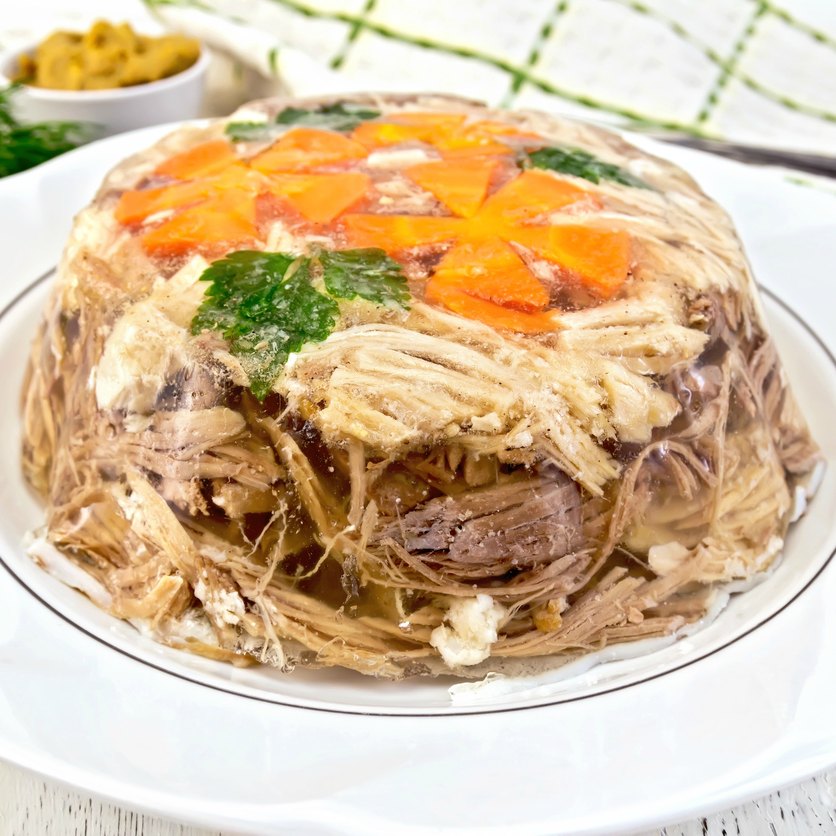 Gelatin molds and salads were primarily sweet and served for dessert. They often featured fruit suspended in Jell-O, made in a mold just like aspic.  This “Cranberry Wobbler” from Click Americana probably graced many Thanksgiving dinner tables, never to be served again. On the other hand, this Ginger Ale Salad from Mid-Century Menu is one of the few Jell-O dishes we found that got rave reviews.

Finally, sweet and savory combinations were also popular.  This salad from Click Americana featured cauliflower, pimentos, and onion. The vegetables were soaked in vinegar, then folded into lime Jell-O. No, we’re not joking. A similar concoction from Vintage Recipe Cards included unflavored gelatin with lemon juice and vinegar for taste, mixed with crushed pineapple and diced cucumber. Garnish with stuffed olives, if it isn’t already unappetizing enough. 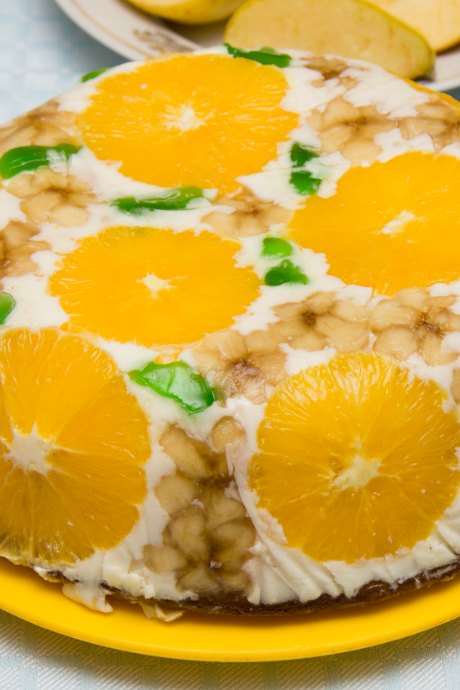 Why did people think aspic, gelatin, and flavored Jell-O should be invited to dinner?  The Daily Meal has some good answers. In the mid-1900’s, refrigerators were still somewhat of a luxury. Anybody could roast a chicken or braise beef, but a gelatin-based dish showed your guests that you were affluent enough to afford a refrigerator. Similarly, the boom in kitchen technology after World War II made gelatin molds (and the refrigerators they required) look slick and modern. It’s not unlike our current obsession with kitchen electrics such as air fryers and multi-cookers.

We still love seafood, but modern tastes run more along the lines of sushi, sashimi, and wild-caught salmon. In the past, tuna and salmon were also popular, but they came from cans. They were also usually unrecognizable once they were served.

This tuna casserole from Click Americana is representative of most tuna casseroles: cream of mushroom soup, canned tuna, and a crunchy topping. Compared to the next two recipes, it doesn’t sound half bad.

On the other hand, we’re not so willing to try  the salmon-tuna pie from Vintage Recipe Cards. It sounds almost like a crustless quiche topped with mashed potatoes — made from instant potato flakes, of course. It doesn’t look bad, but it doesn’t sound good either. 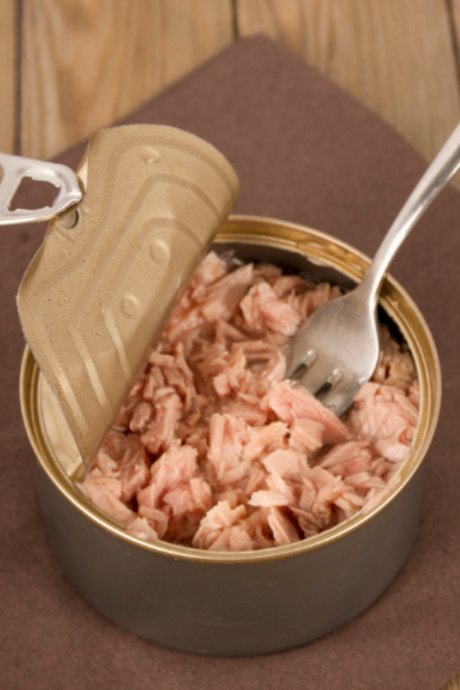 But the recipe you couldn’t pay us enough to try is this one from Mid-Century Menu for a shrimp mold, in the shape of a fish. You really ought to read the post though, for the sheer entertainment value. Our favorite part is this quote from the author:

Why did we ruin the public image of canned fish in this way?  The Kitchn makes some excellent points about the benefits of canned fish. They also call out our irrational prejudices against it. Those benefits, combined with the novelty of canned food bought from a supermarket, are what made cooks create so many recipes featuring seafood. They just got a little carried away in their creativity.

Given the tendency of mid-century chefs to go overboard, it’s no surprise that Christmas was the most wonderful time of the year. By “wonderful,” we mean “seemed like a good idea at the time.”

One of the Christmas classics of yore that seems to have disappeared are popcorn balls.  This recipe page from Click Americana featured Jiffy-Pop popcorn — a vintage classic itself — and all the ways to use it to make holiday desserts. We’ve never been clear on whether popcorn balls were meant to be food or decorations, unlike gingerbread houses which are entirely for show. 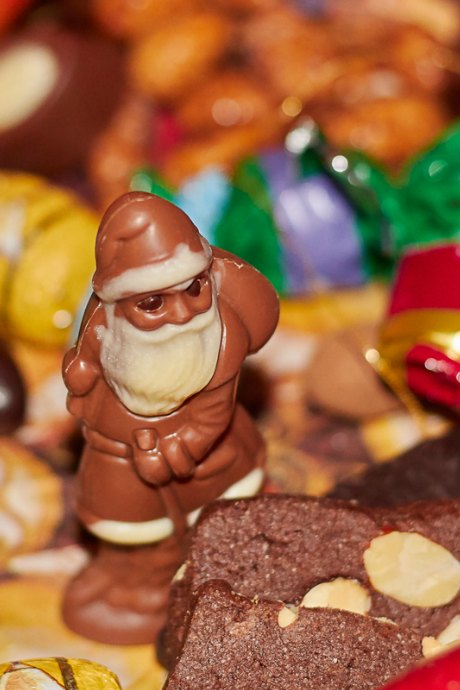 This recipe from Vintage Recipe Cards is one we’ve never seen before, and we’re grateful for that. These cookies are called Santa’s Whiskers because of the flaked coconut covering them. The cookie dough includes chopped red and green candied cherries, another vintage staple. While you probably won’t want to make them, you should click through to see the vintage decorations in the “serving suggestion” photo on the recipe card.

Finally, vintage Christmas recipes aren’t limited to desserts.  This mayonnaise salad recipe from Mid-Century Menu looks like a 1970s-era Pinterest fail, despite all the effort that went into it. It’s got gelatin and mayonnaise, cottage cheese and cabbage, plus all of the assorted vegetables needed for the full presentation of Frosty the Slaw Man. Read the post for the sheer entertainment, but even the Mid-Century Menu team wasn’t impressed by the taste.

Whether you plan to attempt a vintage recipe or stick to modern favorites, retro-inspired cookware can add style to your kitchen. Below, you’ll find a few of our top picks.

With all the gelatin in vintage recipes, you’ll need a  Bundt pan. One of the best reasons to invest in Bundt pans is their versatility. Fill a Bundt pan with cake batter, monkey bread dough, lime Jell-O, or tomato aspic. Your Bundt pan can handle all of that and much more.

The whole line of SMEG products are delightfully retro, from their  blenders to their toasters and stand mixers. Not only do they feature retro designs, they also come in pastel blue, pink, and green, in addition to standard appliance colors like red, white, and black.