Given the events of the past year, it’s no wonder we’ve had occasional urges to light fires. Fortunately, we’ve been able to cope in healthier, more productive ways, like spending more time in the kitchen. But you can do both at the same time -- set food aflame in your own home kitchen -- safely and deliciously. Keep reading to learn about flambé desserts: what flambé means, how to flambé safely, and what you can flambé at home.

What Happens When You Flambé?

We just described flambé as setting food aflame, but that’s not quite accurate. Instead, what’s burning is the alcohol you’ve poured over your food. When flambéing, you add pre-heated liquor to a sweet or savory dish just before serving, and quickly ignite it. This technique is not only visually dramatic, but it also adds flavor to your dish. The taste of the liquor comes through after the alcohol burns off, and the flavors of the ingredients in your dish are amplified by the heat of the flame.

Flambéing is a bit more involved than merely dousing a dessert in rum and lighting a match. Because you’re literally playing with fire, it’s important to know what you’re doing. Start by gathering all the tools and ingredients, including a bowl or saucepan for heating the liquor, long-reach matches or lighter, a lid for safety, and the right kind of liquor.

What’s the right kind of liquor? That depends on what you’re flambéing. Beer or wine won’t ignite, because the alcohol content is too low. On the other hand, liquors like Everclear or Bacardi 151 have an ABV (alcohol by volume) that’s too high to risk setting it on fire. Stick to liquors in the range of 80-100 proof, which translates to 40-50% ABV. 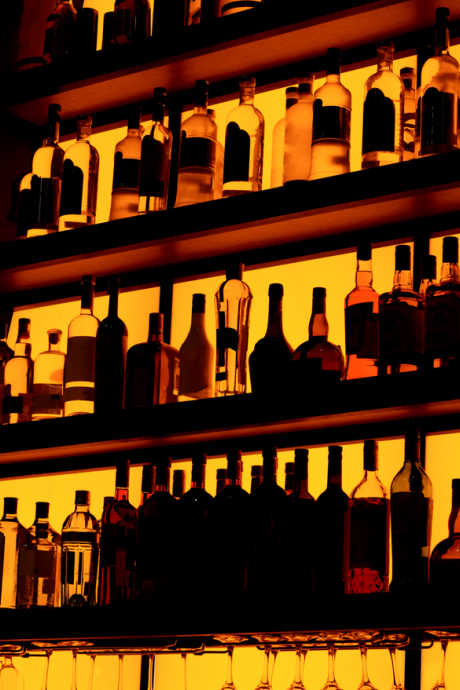 Although flambéing is all about putting on a show, the flavor of the liquor you use still matters. That’s another reason Everclear wouldn’t be a good choice, and neither would vodka. Choose a liquor with a flavor that compliments your dish. For example, Grand Marnier is an excellent choice for cherries and berries. Bananas, apples, and pears can all stand up to bourbon. Rum pairs nicely with all sorts of fruit.

Your liquor needs to be heated up too, before it will catch fire. You can heat it on the stovetop using a saucepan, or in the microwave using a glass or porcelain bowl. Either way, make sure it heats up but doesn’t boil, or the alcohol will evaporate. But if your liquor is too cold, it won’t ignite.

Once your liquor is ready to go, turn off the burner under the pan holding your dessert (or whatever dish it is you’re going to flambé). Add the liquor to the pan, pouring it over the top of your dish. Then use your long-reach matches or lighter to ignite the alcohol fumes rising up from the pan. Shake the pan gently to distribute the alcohol. Stand back from the flames, and keep that lid at hand in case you need to cover them. They should extinguish on their own within 30 seconds, after all the alcohol is consumed. Voila!

Sounds pretty straightforward, doesn’t it? As long as you adhere to smart safety practices, flambéing is simple. We’ll summarize the key safety tips below.

Tip: Turn off all burners. The only source of flame should be the match or lighter you’re using to ignite the liquor.

Reason: Alcohol is highly flammable. You don’t want to risk igniting it accidentally or in an uncontrolled way, thanks to an unexpected heat source.

Reason: You don’t want to draw liquor fumes away from the pan, as this can spread flames outside the pan.

Tip: Use a long-reach match or lighter.

Reason: These tools keep your hands as far away from the flames as possible. 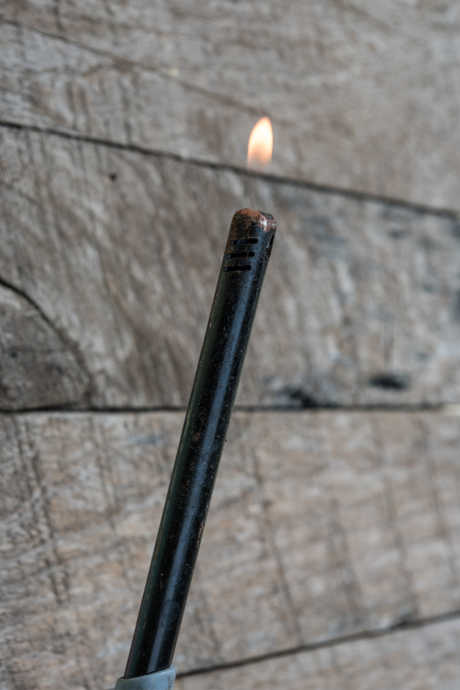 Tip: Use a stainless steel or cast iron pan.

Reason: Nonstick and aluminum pans can be damaged by direct flames.

Tip: Don’t pour liquor straight from the bottle into the pan. Pour it slowly from a separate container, like a bowl or saucepan.

Reason: One, you don’t want to accidentally pour excess liquor into the pan, or splash it outside the pan. Two, if you haven’t yet turned off the burners or there’s an open flame nearby, the fumes from the bottle itself can ignite.

Tip: Have a lid handy.

Reason: Although the flames should go out once the alcohol is consumed, you can use the lid to cover the fire if it starts to concern you.

Several classic desserts call for flambéing. Choose one of these recipes we’ve gathered, and give it a try! 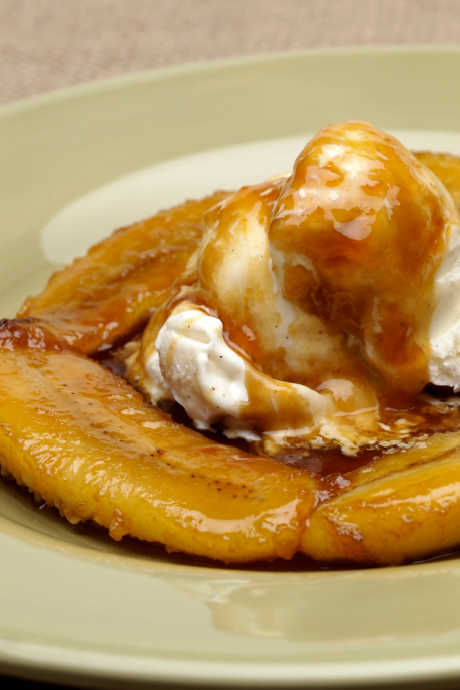 This recipe for Bananas Foster comes straight from Brennan’s, the famous New Orleans restaurant. We love everything about it, except for the part about tipping the pan toward the flame to ignite the rum. Unless you’re a trained chef in a restaurant kitchen, we advise adhering to the safety tips outlined above. That means turning off the burner before adding the liquor to the pan, and using a long-reach match or lighter to ignite it. Top vanilla ice cream with the flambéed bananas and warm sauce.

This recipe for Cherries Jubilee hails from Emeril Lagasse’s website. We understand if you prefer not to pit a pound of cherries yourself; frozen cherries will work, especially when they’re not in season. Again, we caution against using the flame of the burner to ignite the liquor -- in this case, cherry brandy -- and implore you to turn off the heat and light your fire from a safe distance instead. Add the flambéed cherries and sauce to a dish of vanilla ice cream and serve immediately.

You can flambé all sorts of fruit, but pears are a mainstay. This recipe from Bon Appetit calls for Bosc pears, brown sugar, lots and lots of butter, and both amaretto and brandy. Unfortunately, we must contradict the directions for lighting the liquor. It’s just not safe for amateurs like us to tip the pan to catch flame from the burner. In this recipe, the flambéed pears and caramel sauce accompany yogurt, but you can also serve them alone or with vanilla ice cream. 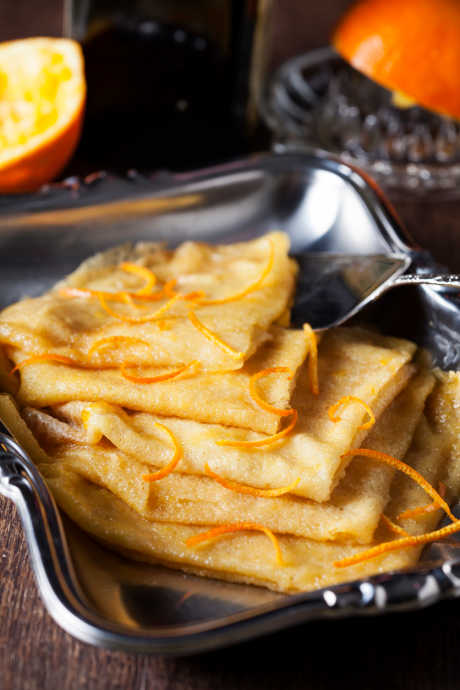 Finally, we can’t leave out Crepes Suzette. We selected this recipe from Nigella Lawson for its simplicity. You can make crepes from scratch, but she makes a good point that once they’ve been smothered in sauce and set on fire, it doesn’t much matter whether they’re store-bought or not.