We mentioned leeks briefly in our recent discussion of various types of onions and how to use them. Now it’s time to explore this allium in greater depth, including five delicious ways to incorporate leeks into your fall and winter menus.

How to Select, Store, and Prepare Leeks

Choose leeks much the same way you’d choose green onions. The freshest leeks will have firm stalks, flat bottoms, and bright green leaves. Bypass leeks with fraying stalks, rounded bottoms, and dark, withered leaves. Spring leeks are smaller and milder than the fall crop but they’re all worth eating. Keep in mind the light green and white stalks are edible, but the dark green leaves are too tough for eating. Add them to your stash of onion tops and carrot peelings to help add flavor to stock. 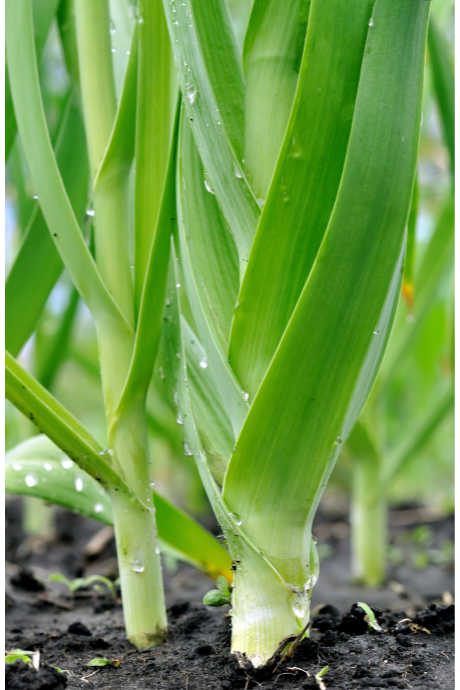 Store leeks in a plastic bag in the refrigerator to keep them fresh and prevent their odor from penetrating other foods. They can be stored in the refrigerator for a couple weeks so it’s not necessary to use them immediately. Don’t wash leeks until just before you plan to prepare them, but do wash them thoroughly at that time. Sand, dirt, and grit often hide in the layers of leaves. In fact, you can chop them before rinsing them to help ensure they’re completely clean.

What to Make With Leeks

Because leeks are part of the onion family, they can be used almost interchangeably with onions. We found five recipes that sound delicious, but you might also like to try substituting leeks for onions in one of your favorite recipes.

This pizza recipe from Delish will give you another reason to make your own instead of calling for delivery. Fry the bacon, then sauté the leeks in the bacon grease. In place of red pizza sauce, spread a thin layer of mascarpone on the dough. Top your pizza with crisp bacon and caramelized leeks in between layers of mozzarella, with a sprinkle of freshly grated Parmesan on top. Such an elegant change from sausage and pepperoni.

Another soup to add to your fall lineup is this creamy caramelized leek soup from How Sweet Eats. Caramelize the leeks in butter and olive oil for a good 20 minutes, then add brown sugar and let them cook a bit longer. Combine them with a bulb of roasted garlic, white wine, and chicken stock. After you let the soup simmer a bit, puree it with an immersion blender or transfer it to a container blender. Finally, stir in some half-and-half. Serve with sliced green onions and maple bacon, which is bacon done in the oven and brushed with maple syrup. 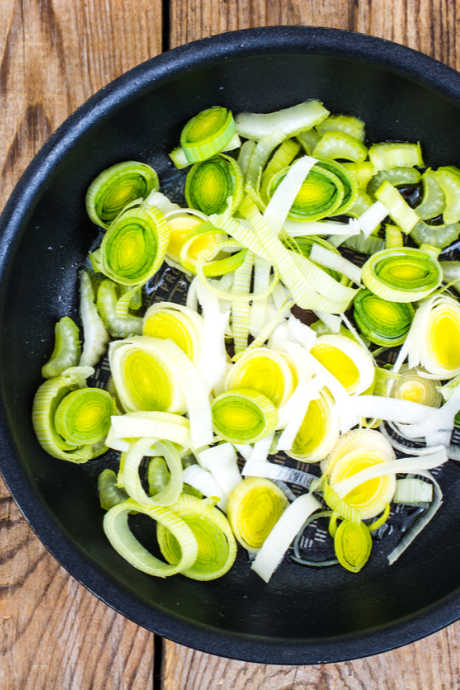 Instead of your usual Thanksgiving stuffing, try this bread pudding straight from Thomas Keller, via Food 52. Sauté the leeks in butter while the bread cubes bake. Then combine both the leeks and the bread cubes with thyme and chives. Whisk together the liquid ingredients -- eggs, cream, and milk -- along with salt and pepper, and nutmeg. Layer the leek and bread mixture in a baking pan along with cheese, and pour the liquid mixture over the top until all bread cubes are soaked. Your bread pudding will be done baking when the liquid is set and the top is brown.

Bookmark this recipe for St. Patrick’s Day, but enjoy making this Irish comfort food recipe from Bon Appetit all winter long. Colcannon is a traditional Irish dish that combines cabbage with mashed potatoes. In this recipe, you’ll sauté leeks and garlic in butter, along with half the cabbage. Add milk and cream to the cabbage and alliums, and simmer this mixture before mashing it with boiled potatoes and the rest of the cabbage. Garnish the colcannon with sliced green onions before serving. You may never go back to plain mashed potatoes.

While frittatas are a clever and tasty way to use up leftovers, they can also showcase seasonal vegetables. Try this recipe from Fine Cooking where leeks are the star of the show. Once again, you’ll saute leeks in oil and butter. Transfer the cooked leeks to a plate, and wipe the skillet before reusing it to cook your frittata. Whisk a half-dozen eggs with salt and pepper, then add crumbled goat cheese and fresh thyme. Stir in the leeks before pouring the mixture into the pan. Cook briefly on the stovetop before finishing your frittata in the oven.