Nuts are a delicious snack, topping, and mix-in all year long. Whether you sprinkle them over your morning oatmeal, serve an assortment on a cheese board, or pop a handful before bed, nuts are on the daily menu for many of us. In this post, we’ll cover some of the most popular nuts, along with why you might want to enjoy them regularly.

What’s a Nut, and What’s Not

Most of us think of peanuts, almonds, pecans, walnuts, and cashews as nuts. In the culinary sense, all of these are nuts, along with several other common varieties. However, the botanical definition is different. According to the US Forest Service, “nuts are strictly a particular kind of dry fruit that has a single seed, a hard shell, and a protective husk.” 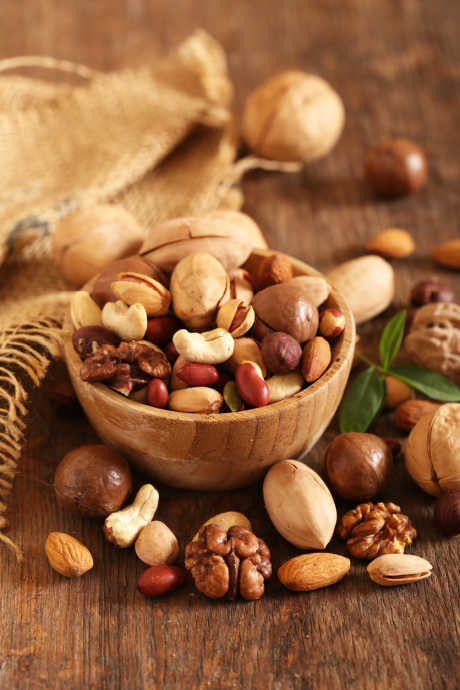 But even the experts don’t always agree. The National Institutes of Health counts almonds as tree nuts, and identifies pine nuts and cashews as nuts too, while drawing a distinction between chestnuts and other tree nuts based on their nutrients. On the other hand, the US Forest Service claims almonds aren’t truly nuts, while including chestnuts in the same group as hazelnuts, pecans, and walnuts. Finally, although we think of peanuts as nuts, they’re actually legumes.

Whether a nut is strictly classified as a nut or not, there’s mounting evidence that nuts offer significant health benefits. We rarely weigh in on the relative healthiness of foods, preferring instead to focus on nutritional benefits. However, this article from the National Institutes of Health cites support from the US Food and Drug Administration and the American Heart Association on the impact of nut consumption on health.

First, nuts have a unique nutrient profile in terms of protein, unsaturated fat, fiber, minerals, and other bioactive compounds. In short, they are chock full of nutrients in a compact, calorie-dense package. Also, studies have shown that a diet including nuts reduces the risk of coronary heart disease, improves cardiovascular health, and positively affects blood cholesterol. In fact, although nuts are high in fat and calories, it appears that moderate consumption of nuts does not adversely affect weight.

Different nuts have different nutrient profiles, as we’ll cover in greater detail later in this post. But according to the Mayo Clinic, they are all generally healthy and offer cardiovascular benefits. They do note that salted or sugared nuts aren’t on par with plain dry-roasted nuts where it comes to nutrition. In other words, chocolate-covered peanuts may be a delicious treat, but they aren’t a heart-healthy choice.

Nuts in the United States

What we found even more fascinating about nuts was how many varieties are native to the US, including walnuts, pecans, pine nuts, and acorns.

Acorns are the fruit of oak trees, scooped up and hidden away by squirrels. While acorns are plentiful, they’re not easily processed. Walnuts are somewhat easier to crack, but the leaves and stems of walnut trees produce chemicals that can be toxic to other plants. Those chemicals are washed into the soil by rain, discouraging growth of other plants around walnut trees. 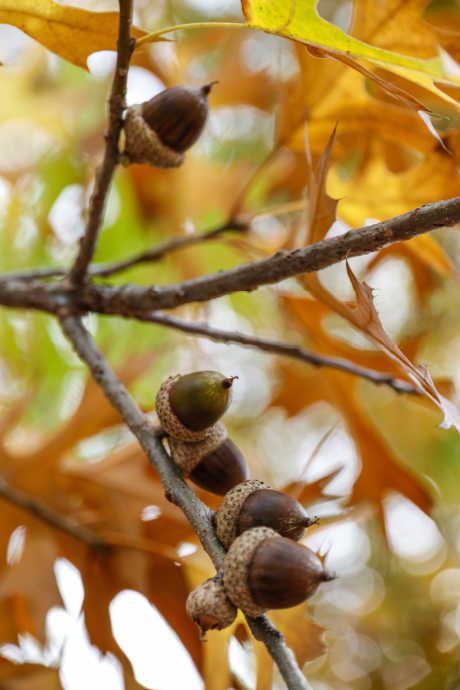 Pecans are widely available and easy to shell, making them a staple for Native Americans and British colonists alike. Pine nuts are similarly plentiful, found inside pine cones produced by over a dozen pine tree species, although they are technically seeds rather than nuts. Finally, the American Chestnut tree was native to the US and grew abundantly until nearly all of these trees were killed by chestnut blight. Now chestnuts are primarily grown in Asia.

Like our posts on cheese, we could probably dedicate an entire post to each popular nut variety. Instead, we’ll offer a quick synopsis of six popular nuts: almonds, walnuts, pecans, hazelnuts, cashews, and pistachios.

Almonds date back to the ancient Greeks and Biblical times. Almond trees are pollinated by bees, and it only takes three years for an almond tree to begin bearing fruit. More almonds are grown in California than anywhere else in the world, accounting for over 80% of all almonds produced globally. 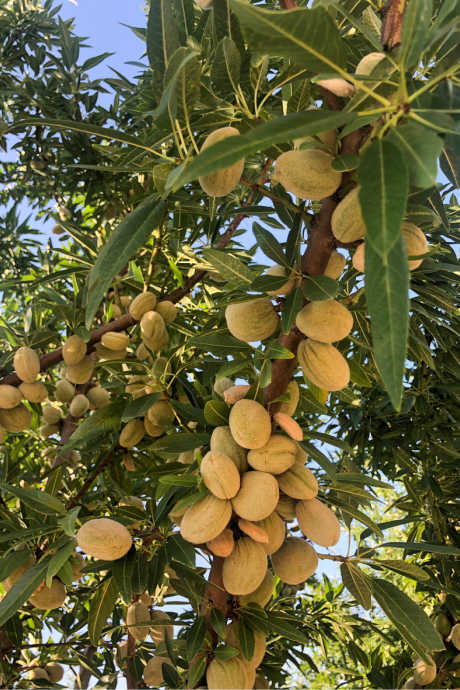 Almonds are high in vitamins B2 (riboflavin) and E, along with minerals including magnesium, calcium, and potassium. A one-ounce serving of almonds (approximately 24 almonds) is especially nutritious, with six grams of protein and three grams of fiber.

Walnuts are even more ancient than almonds, going back over 9,000 years. They were also one of many items traded via the Silk Road traversing Europe and Asia. Walnut trees were introduced to the US by Franciscan monks in the 18th century. Like almonds, US walnuts are grown almost exclusively in California, and California walnuts make up more than two-thirds of global production. Walnut trees are pollinated by the wind, and they bear fruit within five to seven years of planting. 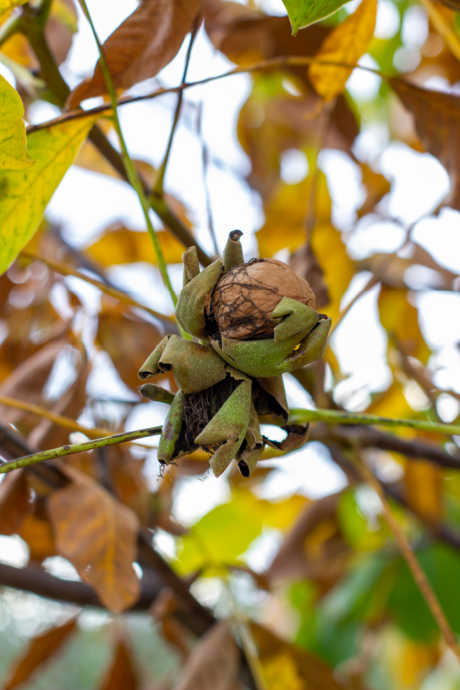 Walnuts offer more alpha-linolenic acid than any other tree nuts. They’re also high in vitamins B6 and E and folic acid, plus minerals such as magnesium, copper, and phosphorus. A one-ounce serving of walnuts (approximately 14 walnut halves) contains four grams of protein and two grams of fiber.

While pecans used to share the stage with chestnuts, they’re now the primary native tree nut species in the US. Our knowledge of pecans dates back to the 16th century with the arrival of settlers from Europe. They’re grown across the southern US, from west to east, and comprise 80% of global pecan production. Like walnuts, pecan trees are wind-pollinated and take up to seven years to begin producing nuts. 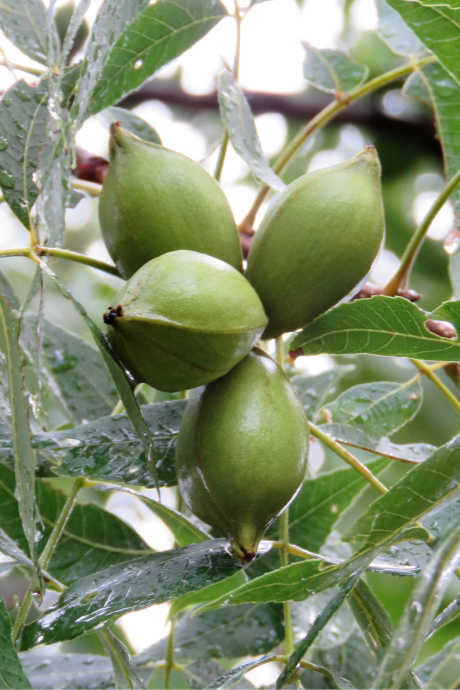 The pronunciation of the word “pecan” varies, but it’s not necessarily a matter of North vs. South, as both versions can be heard all over the US. No matter how you say it, this nut is packed with 19 vitamins and minerals, including vitamins A and E and folic acid, plus calcium, magnesium, phosphorus, and zinc. One ounce of pecans (approximately 15 pecan halves) contains three grams of protein and three grams of fiber.

Also known as filberts, hazelnuts are another ancient nut, dating back 5,000 years to a Chinese manuscript. They were also used in Greek medicine. Hazelnut trees were brought to the US by the French. While Oregon is the primary hazelnut producer in the US, Turkey and Italy lead the way in global production. Hazelnut trees are pollinated by the wind, and they are especially prolific, bearing fruit for over 100 years. 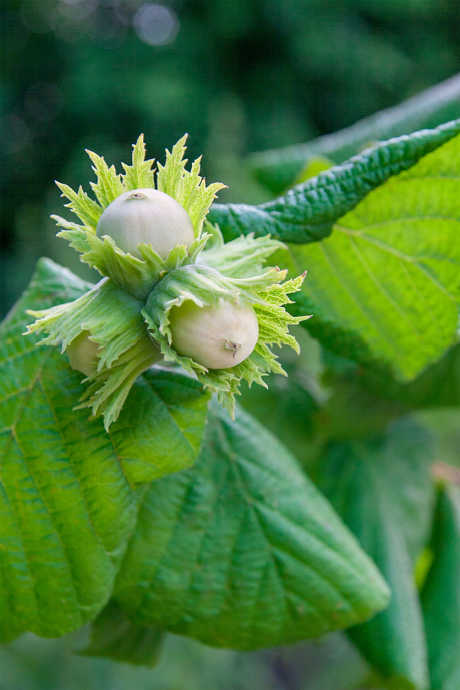 Hazelnuts offer more folic acid than any other tree nut. They’re also high in Vitamin E, manganese, and copper. One ounce of hazelnuts (approximately 21 hazelnuts) contains four grams of protein and three grams of fiber. While hazelnuts are a key ingredient in Nutella spread, we recommend eating them plain for optimal nutrition.

While India is the primary global producer of cashews, the cashew tree is actually native to Brazil. It was brought to India and African colonies by the Portuguese, where cashew trees are still grown today. Cashew trees are especially hardy, able to grow in dry conditions with poor soil quality. These insect-pollinated trees bear fruit called cashew apples, with the cashew nut at the bottom, encased in a hard shell. While the apple can be eaten, it’s the nut that’s prized. 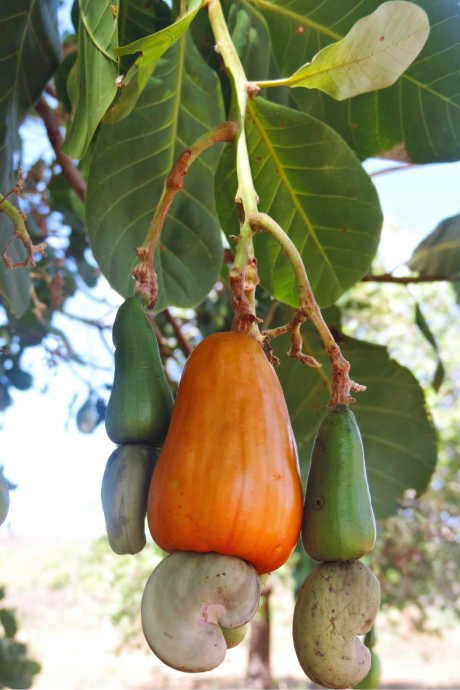 Cashews are high in vitamins B1 (thiamine) and K, and an excellent source of copper, phosphorus, manganese, magnesium, and zinc. One ounce of cashews (approximately 18 cashews) contains five grams of protein and one gram of fiber.

Pistachios are yet another nut that dates back millennia, to Biblical times and the ancient Middle East. In the US, pistachios are grown almost exclusively in California, and the US is the top global producer of pistachios. The trees take up to ten years to start bearing fruit, and they hit peak production around twenty years. 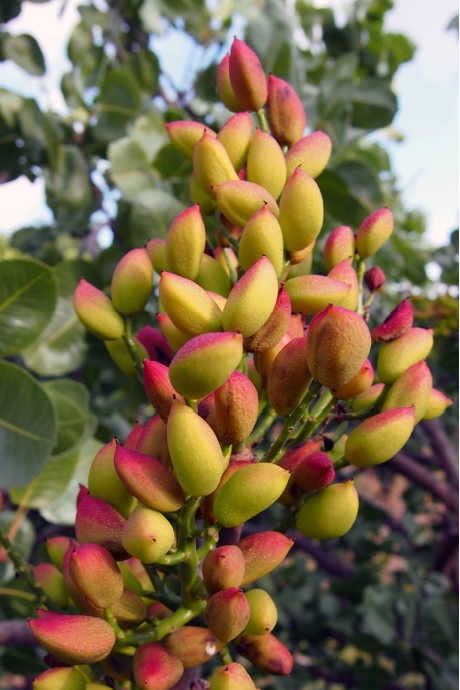 Pistachios are chock full of nutrients, including vitamins A, E, K, and folic acid. They are an excellent source of minerals too, including potassium, phosphorus, magnesium, and calcium. One ounce of pistachios (approximately 49 pistachios) contains six grams of protein and three grams of fiber.