While French cooking is known as the basis for many culinary standards, it’s not always as difficult or intimidating as it may seem. One key component -- the roux -- is simple, elegant, and essential to a vast number of recipes. If you’ve made gravy from scratch, you’ve made a roux. But what is a roux, and why is it so important in cooking? We’ll explore the various ways to make and use a roux so you can add this building block to your cooking repertoire.

What Is a Roux?

While we have been successfully making roux for years, we looked to experts to help explain the details behind this deceptively simple combination. Epicurious breaks down a roux to four components: Flour, fat, heat, and time. Equal parts of flour and fat are whisked together over heat to form a paste. This paste is part of the base for four of the mother sauces of French cooking: Bechamel, Veloute, Tomat, and Espagnole. Roux is also a key component in Cajun and Creole cooking, which isn’t surprising given these styles’ French roots. 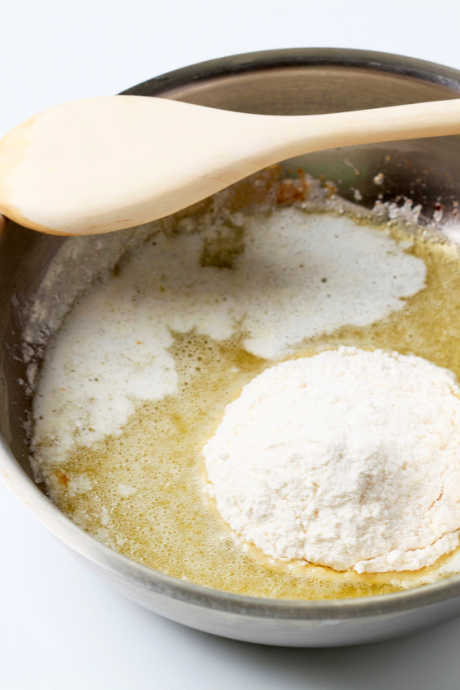 Almost any fat will do the job in a roux, though your choice is likely to depend on the recipe you’re making. Butter is the standard in French cooking, while bacon grease or lard is a better choice for Cajun or Creole cooking, where the roux is cooked for much longer.

4 Steps to a Roux

A roux is simple to make, but it does require your attention. Not all roux are created equal; the components and cooking duration differ based on how you plan to use your roux.

The Michelin Guide recommends starting with low heat. This approach will give you the most control, though it will take longer. You can use higher heat to speed up the process, but you will need to stir constantly to keep your roux from burning. If you use butter for your fat, keep the heat to medium-low or low.

Step 2: Stir in the Flour

Once the fat is sufficiently hot, add the flour to the pan and stir. You can use a whisk, or stir in a figure-8 pattern with a wooden spoon. The mixture will form a paste, but you should still be able to move it around easily. If it’s too thick, add some more fat. Conversely, if the mixture seems too liquid, add some more flour.

Step 3: Cook the Roux to the Proper Shade

The cooking time for a roux depends on how you plan to use it. For example, Bechamel sauce uses a white roux, and so does Veloute. Most Cajun or Creole dishes call for a brown or dark roux. A white roux cooks for less than five minutes and hardly darkens in color. A brown or dark roux may take a half-hour or more to reach the desired color, smell, and taste. Not surprisingly, darker roux have a more intense flavor than white or blond roux. However, as you cook a roux, it loses the ability to thicken sauces. Keep that in mind as you cook and stir.

This step also depends on the intended use for your roux. Bechamel sauce -- often used as a base for cheese sauce and in casseroles -- includes milk. Veloute uses a light stock like chicken, while Espagnole uses a dark stock such as beef.

How to Use a Roux

A roux is the starting point for the mother sauces in French cooking, which means it’s an essential building block for a variety of dishes. In this section, we’ll focus on Bechamel sauce. It’s versatile and commonly used, so it’s a smart place to start using roux. 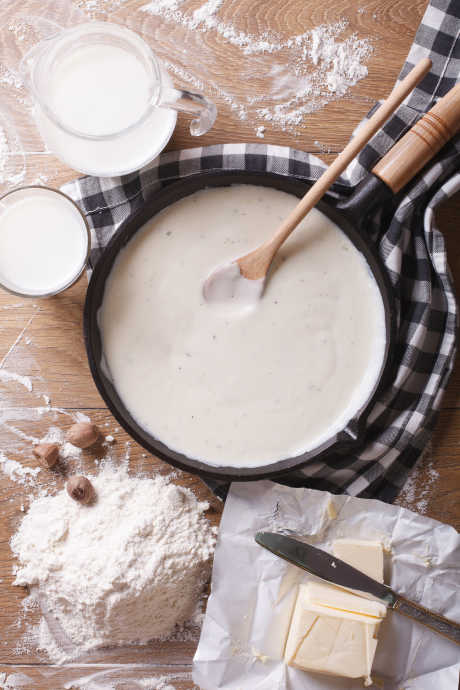 Bechamel is made with the lightest of the roux. You’ll only stir the flour and butter long enough to absorb all the raw flour and darken the mixture slightly. This white roux is intended to thicken sauces rather than add flavor. The flavor will come from the other ingredients you’ll add later.

Bon Appetit breaks down Bechamel sauce to its basics and clarifies that the details will differ based on how you plan to use your Bechamel. All Bechamel sauces add milk to the roux, but you may use more or less milk depending on how thick or thin your sauce ought to be.

But what do you do with Bechamel sauce? As we mentioned earlier, it’s often used to make cheese sauce for macaroni and cheese. Bechamel is the “from scratch” version of various condensed soups like cream of chicken and cream of celery. It’s also the basis for sausage gravy served over biscuits, and the binder for lasagnas, gratins, and casseroles. Once you have mastered a roux, you’ll be able to whip up a batch of Bechamel sauce and use it in all sorts of ways.