It’s not impossible to find fresh fruit in the midst of winter. In fact, some fruits are at their best when the weather is cold, like cranberries and pomegranates. Kiwi fruit is another winter gem. Keep reading to learn where kiwi fruit originated (it’s probably not where you think!), where they got their name, and how to enjoy this nutritious sweet-tart fruit.

It may seem like kiwi fruit appeared out of nowhere in the 1980s, or that it came from New Zealand. But kiwi fruit is actually native to China, where it was originally called macaque fruit because the monkeys enjoyed it so much. Before it was given the name kiwi fruit, it was also called Chinese gooseberry.

In the early 1900s, Chinese gooseberry seeds were brought to New Zealand, the US, and the UK. Only the New Zealand seedlings managed to grow into fruit trees. But it wasn’t until they were exported to the US that the official name change took place. The Chinese gooseberry was renamed kiwi fruit at the urging of a US importer, after the national bird of New Zealand. Both kiwi birds and kiwi fruit are brown and fuzzy. 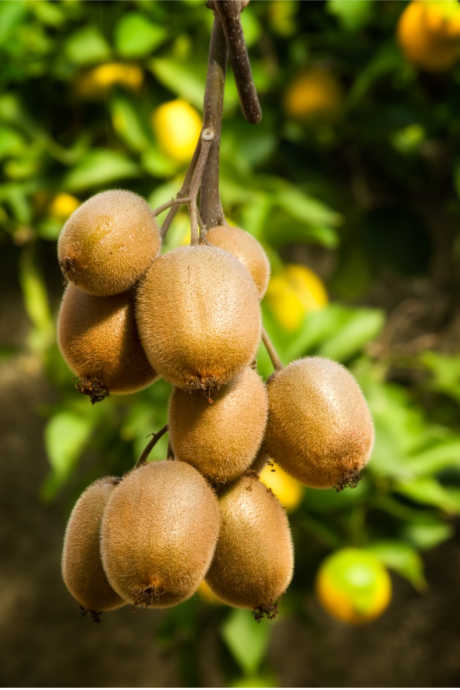 Now, the US grows kiwi fruit ourselves, almost exclusively in California where there are 300 growers. We also import kiwi from large producers around the world, including Italy and Chile. Kiwi fruit is still grown in New Zealand and China too.

One reason for the exploding popularity of kiwi fruit is how nutritious it is. In addition to being full of fiber, like many fruits, kiwi is also packed with vitamins and minerals. Kiwi fruit is an excellent source of folic acid, Vitamins C and E, potassium, magnesium, and zinc. It also contains antioxidants and provides the phytochemical lutein, which is essential for eye health. Another point in favor of kiwi is its low glycemic index, which makes it a good option for diabetics.

To Peel, or Not to Peel?

If you’ve always peeled your kiwi fruit, or scooped the fruit out of the skin, consider leaving the peel in place. The skin contains even more nutrients and fiber. If you slice your kiwi thinly, you won’t even notice the skin. Of course, you should be sure to wash the skin thoroughly before eating, as you do with other types of produce with edible peels.

How to Choose and Store Kiwi Fruit 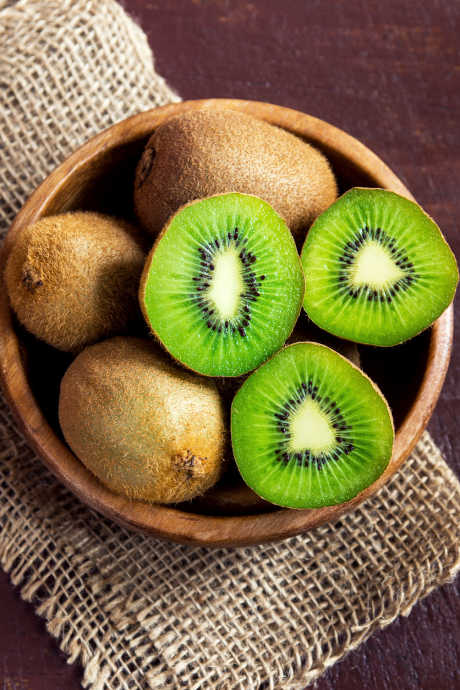 Regardless of where your grocery store’s kiwi fruit comes from, choose kiwi that are slightly soft, much in the same way you would select mangoes or avocados. It doesn’t matter how large or small they are; ripe kiwi will taste the same. Another advantage of kiwi fruit is how long it will last. Keep it on the counter for a few days, or in the refrigerator for a few weeks.

We love to add kiwi to fresh fruit salads or salsa, or eat it plain on its own. But you can also use it as an ingredient when baking or in cocktails. Below, you’ll find four recipes featuring kiwi fruit. We hope you’ll give them a try.

This recipe comes from Australia’s top food site, and it looks like a great way to enjoy tropical flavors no matter what the season. Because Australian terms for common ingredients can vary somewhat from the ones we’re familiar with, we’ll help make sense of them for you.

Self-raising flour is the same as self-rising flour, but you don’t need to buy another bag of flour. Refer to this helpful trick from Add a Pinch, and simply add 1-1/2 teaspoons of baking powder and 1/4-teaspoon of salt to each cup of flour. Likewise, you can make your own caster sugar by running granulated sugar through a blender or food processor for a few seconds. The Webstaurant Store blog recommends grinding one cup plus two teaspoons of granulated sugar for each cup of caster sugar. Lime rind is the same as lime zest; zest a lime just as you would a lemon. Icing sugar is the same as powdered sugar. Finally, desiccated coconut is dried coconut. It’s similar to the shredded or flaked varieties, but more finely ground.

This recipe from Food & Wine makes a light salad to accompany lunch or dinner. The bulk of the salad comes from endive leaves, topped with kiwi and avocado slices. Dress it with a homemade mix of olive oil, Champagne vinegar, Dijon mustard, honey, and salt and pepper. Then sprinkle sunflower seeds over the top before serving. 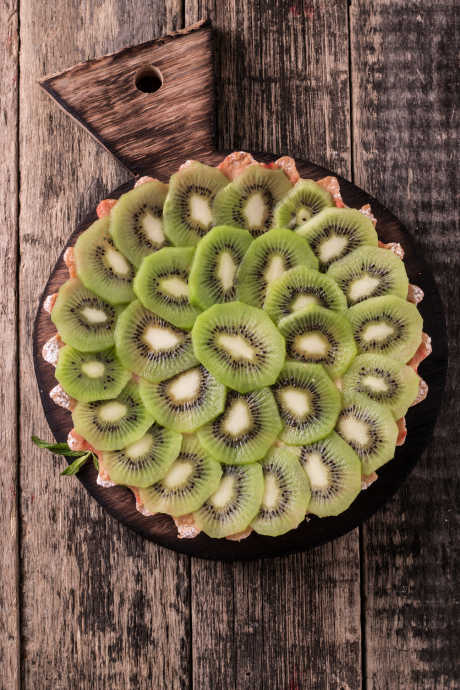 We’re curious to try this recipe from Self, which calls for a fiber-rich crust with a tart, creamy filling. The crust is made from graham cracker crumbs, oats, pumpkin seeds, and moistened ground flaxseed. The filling includes sweetened condensed milk, egg yolks, and the zest and juice of four limes. Decorate the top of the baked pie with thin slices of kiwi once the pie has cooled for half an hour.

Sangria is one of our favorites, and this recipe from Ingrid Hoffmann via Food Network looks delicious. Make a simple syrup of granulated sugar and water on the stovetop, and let it cool. Then combine one bottle of white wine with one cup of Cointreau and a cup of lemon juice, along with thinly sliced kiwi, cubed Granny Smith apples, and halved seedless green grapes. Stir in the simple syrup and a 1-liter bottle of unflavored soda water. While the recipe doesn’t call for a particular varietal of white wine, we think a New Zealand Sauvignon Blanc would be perfect.