While on a family vacation in South Dakota, Chef’s Corner Store owners Darren and Nancy visited Intoxibakes, a Sioux Falls-based bakery specializing in cupcakes infused with alcohol. We’ve been known to enjoy the combination of  cocktails and desserts, so Intoxibakes was a must-stop. Since a repeat visit requires a plane ticket, we decided to figure out how to turn our favorite cocktails into cupcakes!

We knew baking would dilute the flavor of the liquors, so we also incorporated other supporting flavors from each cocktail into our cupcakes. We added a heaping tablespoon each of ground ginger and fresh lime zest to our Moscow Mule cupcakes. For the Cosmopolitan cupcakes, we added a tablespoon each of cranberry cocktail and lime zest. The Old Fashioned cupcakes were a bit trickier; we added two teaspoons of Angostura bitters to achieve that signature taste. For the Margarita cupcakes, we added  lime juice and lime zest.

This method definitely works best for sweeter cocktails with fruity or spicy flavors. You can adjust the intensity of your cupcakes based on personal taste. For example, if you're not a fan of ginger’s bite, use only a teaspoon. The same advice applies to the other mix-ins. Be careful not to add too much liquid, which can disrupt your recipe ratios. Finally, when making multiple flavors of cupcakes, we recommend using food coloring as a code to help keep them straight. 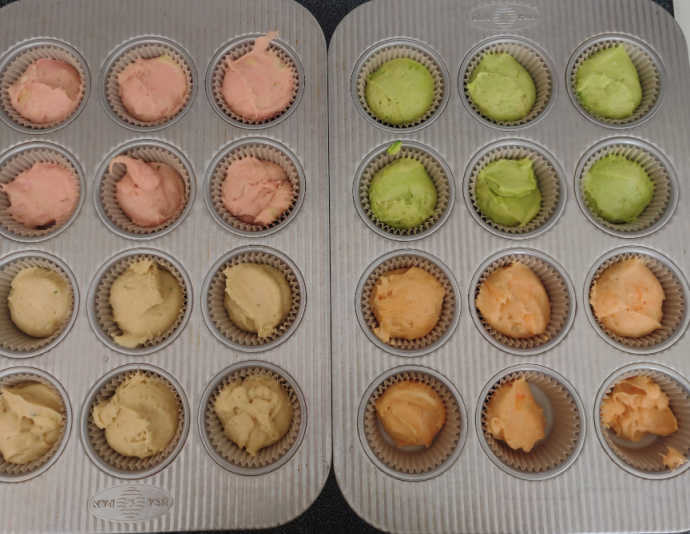 We brushed the outside of the finished cupcakes with their respective liquors while they cooled. Now is not the time to use the cheap stuff. If you’re making cupcakes inspired by your favorite cocktail, chances are you already have the necessary liquor on hand. If you’re baking for a friend whose tastes differ from yours, we recommend buying tiny travel bottles. You’ll have plenty for your cupcakes without spending extra on a type of liquor you don't drink.

We’d argue that the best part of any cupcake is the frosting, and a good cocktail cupcake should be no exception. We took our favorite American buttercream, omitted the vanilla, and replaced it with liquor. We mixed the frosting first, and then added liquor a teaspoon at a time until we got the flavor we wanted. Pipe the frosting onto your cupcakes, or spread it using an offset spatula.

Part of the fun of a fancy cocktail is the garnish. We added lemon zest to our Old Fashioned cupcakes, lime zest to our Moscow Mules and Cosmopolitans, and lime zest and finishing salt to our Margaritas.